Mondelez, the maker of Oreo, construction materials group Cemex, supermarket chain Consum, Suzuki Motor and a bunch of other companies in different parts of the world are greening their power supply through power purchase agreements (PPAs) and similar contracts.

Our latest round-up starts, as usual, with the most recent PPA news covered by Renewables Now. In the end you will find EY’s PPA index. You can also get the round-up straight in your inbox by subscribing here: https://newsletter.renewablesnow.com/corporate-ppa

Data centre campuses provider Vantage Data Centers has signed a 20-year PPA with South African solar financing company SolarAfrica to source 87 MWp of solar energy for its Johannesburg campus, which is due to open next month.

Mondelez to power biscuits factory in Bahrain with solar energy

Mondelez Bahrain Biscuits WLL has teamed up with green energy provider Yellow Door Energy to build a 2.3-MW solar plant in Bahrain to partly power its biscuits factory in the kingdom.

Enel Green to supply clean power to Cemex in Guatemala

Japanese carmaker Suzuki Motor Corp (TYO:7269) is boosting the use of renewable electricity at its plants in India through a PPA for electricity from a 17.6-MW wind and solar hybrid facility.

Brazil-based aerospace company Embraer SA (NYSE:ERJ) has struck a deal ensuring that 100% of the electricity it needs in Brazil will come from renewable sources.

Clean Energy Connect Co Ltd will deploy 70 MW of solar power generating capacity for the benefit of the NTT Group in Japan.

Spain and the US are again at the top of EY’s recently launched PPA index. They were followed by Germany and the UK, which improved their positions, and Australia, which remained fifth. 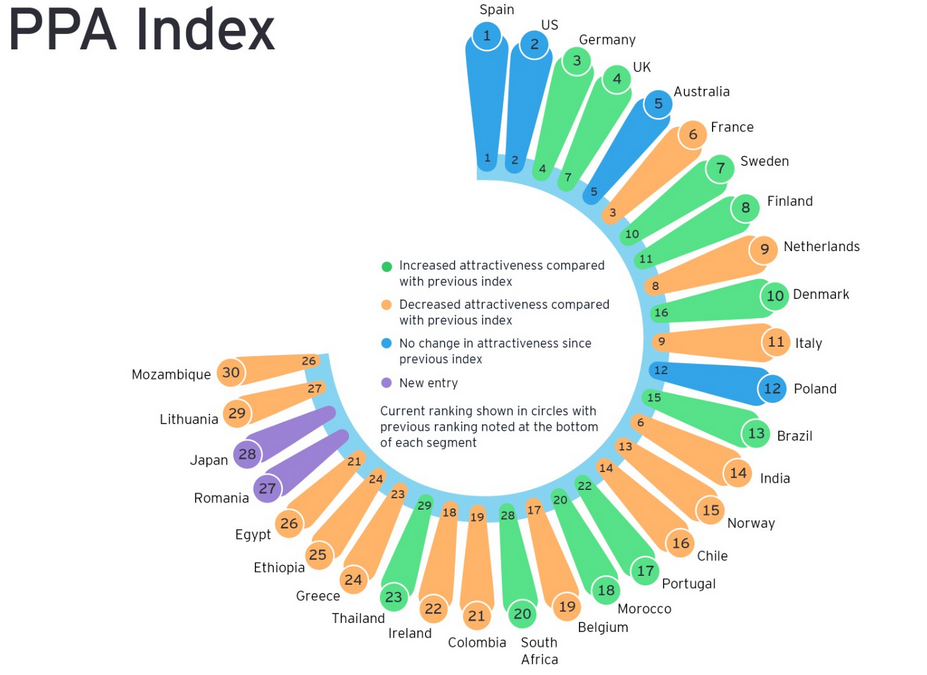