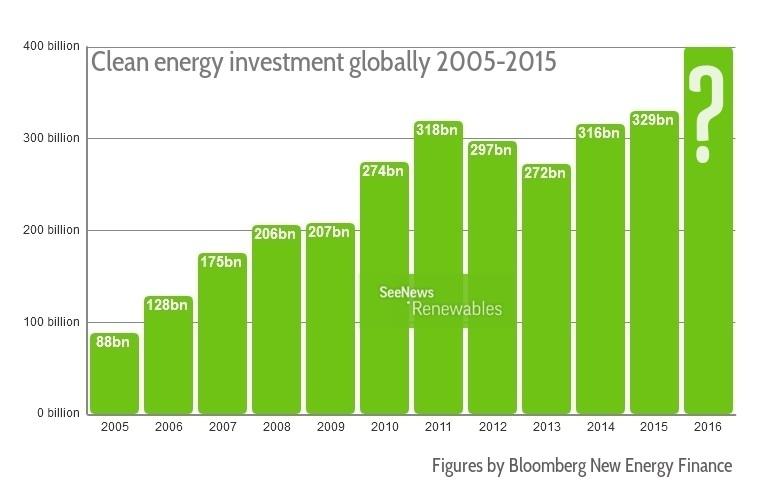 January 14 (SeeNews) - Clean energy investment in 2015 rose to the record-high USD 329.3 billion (EUR 303bn), thanks to growth in China and India, Africa, the US and Latin America.

A new report by Bloomberg New Energy Finance (BNEF) shows that investment in the past year was 4% above 2014 figures. It also beat by 3% the previous record of USD 318.3 billion set in 2011. That happened despite the falling fossil fuel commodity prices, despite the continued weakness of the European economy, despite the declining cost of photovoltaics (PV), meaning that more capacity could be installed for the same price, and despite the strength of the US currency, which is reducing the dollar value of non-dollar investment.

“These figures are a stunning riposte to all those who expected clean energy investment to stall on falling oil and gas prices. They highlight the improving cost-competitiveness of solar and wind power, driven in part by the move by many countries to reverse-auction new capacity rather than providing advantageous tariffs, a shift that has put producers under continuing price pressure,” commented BNEF chairman Michael Liebreich.

Preliminary calculations show that, thanks to utility-scale and small-scale activity, the world installed roughly 64 GW of wind and 57 GW of solar PV in 2015, marking a rise of around 30% on 2014. This combined total of 121 GW will have made up around half of the net capacity added in all generation technologies globally last year.

At USD 199 billion, asset finance of utility-scale projects contributed the most to the 2015 clean energy investment total. The amount was up by 6% year-on-year, with the largest projects financed being offshore wind farms in the North Sea and China. The table shows the biggest projects globally financed in 2015, as defined by BNEF.

The second-largest chunk of 2015 investments came from the rooftop and small-scale solar market. Spending on such projects grew by 12% on 2014 to USD 67.4 billion. Japan was the biggest market here, followed by the US and China.

Meanwhile, public market investment in clean energy companies stood at USD 14.4 billion, down 27% from 2014. Venture capital and private equity investments amounted to USD 5.6 billion, or 27% above 2014 figures. There was also USD 20 billion of asset finance in clean energy technologies, up 11% on the year and USD 28.3 billion of government and corporate research and development spending, up just 1%.

"Wind and solar power are now being adopted in many developing countries as a natural and substantial part of the generation mix: they can be produced more cheaply than often high wholesale power prices; they reduce a country's exposure to expected future fossil fuel prices; and above all they can be built very quickly to meet unfulfilled demand for electricity. And it is very hard to see these trends going backwards, in the light of December's Paris Climate Agreement," said Liebreich.