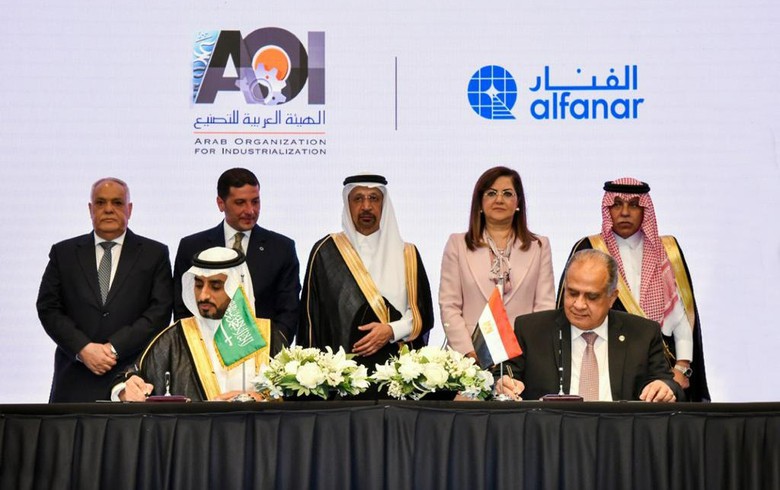 Saudi Arabia's Alfanar signs a partnership agreement with the Arab Organisation for Industrialisation (AOI) in the area of wind energy and green hydrogen. Image by AOI.

The Riyadh-based company will look for partners for the project and plans to rely on the technology it acquired last year when it took over wind turbine manufacturer Senvion India Pvt Ltd, Al-Ajmi explained.

The plan is part of an agreement Alfanar signed with the Arab Organisation for Industrialisation (AOI) during a visit of Saudi Crown Prince Mohammed Bin Salman to Egypt.

The initial focus will be on wind energy with hydrogen to be added at a later stage.

The cooperation between Alfanar and AOI is aimed at localising clean and renewable energy technology with the aim of raising the share of locally produced components to avoid import-related costs and help the country increase its reliance on renewable energy.

Alfanar already has worked on wind projects in Spain with a total capacity of 500 MW and has another wind project of 600 MW in India, of which 300 MW are still under construction. In Egypt, it took part in the development and construction phase of the Benban solar park.

For Alfanar, Egypt will become a platform for exporting its products in the area of wind energy and green hydrogen such as turbines and electrolysers to Africa, Alfanar's regional director Mahmoud Aldelkader told At-Taqa.

The Saudi company will consider entering other African countries -- initially as an equipment producer and later as a project developer, Abdelkader said.