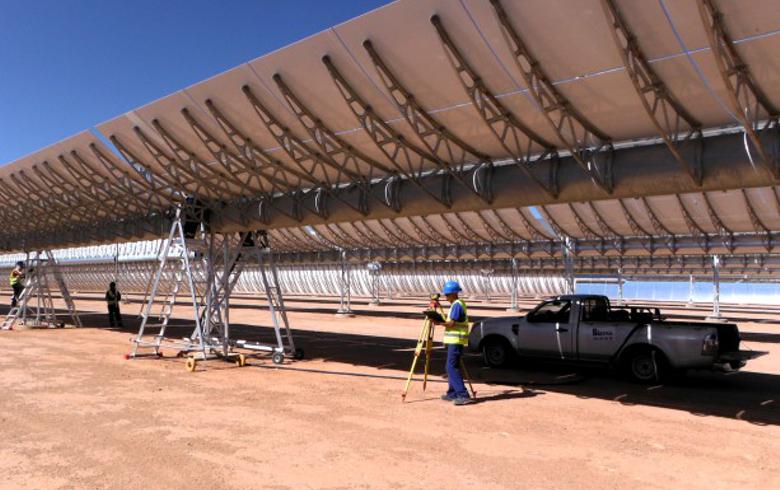 Below the mirrors at the Noor I CSP park in Morocco. Source: www.kfw.de. All Rights Reserved.

December 28 (SeeNews) - The Sunday inauguration of the first phase of Morocco's flagship concentrated solar power project at Ouarzazate has been postponed to "a later date", Moroccan agency for solar energy MASEN said in a news release.

The agency gave no explanation as to what was the reason for the delay. However, according to local media reports the unexpected move is most likely related to the "change in power" at the government's leading institutions for the development of renewable energy.

Today, the government announced that Morocco's agency for solar agency MASEN will take over the policy implementation and coordination of renewable energy development in the country.

The trading city of Ouarzazate, nicknamed the “door of the desert”, as it is located at the gates of the Sahara desert, is planned to overlook 33 sq km (3,300 ha) of crescent-shaped solar mirrors for a total installed capacity of over 500 MW.

The phase one "Noor 1" has a nameplate capacity of 160 MW. Its development was awarded to a consortium lead by Saudi Arabian Acwa Power back in 2012.

Financial close of the project was announced in June 2013 and construction works started two months later.

The overall investment for Noor 1 is estimated at MAD 10 billion. It is being solely financed by the African Development Bank (AfDB) Group.