THE FRIDAY NOTE: Suzlon rises on investment rumour and more of the week's top picks 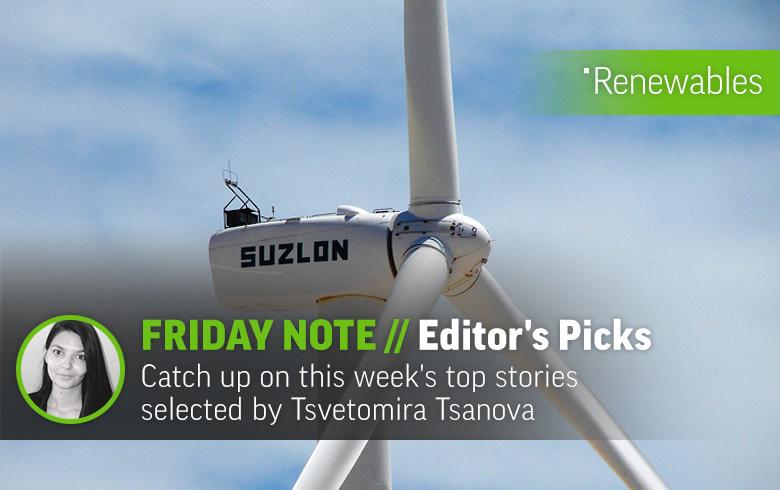 Feb 6, 2015 (SeeNews) - This week, Suzlon’s board denied receiving an investment proposal from an Indian billionaire, Hitachi Zosen and Marubeni unveiled 265 MW of offshore wind projects in Japan, and Canadian Solar said it is buying Sharp’s Recurrent Energy for USD 265 million.

The share price of Suzlon Energy (BOM:532667) rose on Tuesday after a media report saying the managing director of Sun Pharmaceutical Industries was willing to invest in certain wind assets owned by the Indian wind turbine maker. Suzlon’s board said in a statement it has not received any proposal from the billionaire, Dilip Shanghvi.

Overall, domestic manufacturers accounted for more than 98% of the Chinese turbine market in 2014. Meanwhile, Danish company Vestas Wind Systems A/S (CPH:VWS) was the leading foreign supplier in China with a market share of 1.12%, followed by US group General Electric with 0.39% and Spanish turbine maker Gamesa with 0.26%.

Moving to the offshore wind front we learn that the Indian state of Tamil Nadu wants to build around 200 MW of capacity under its Vision 2023 plan. A top official at the Tamil Nadu Energy Development Agency (TEDA) has called on the government to help the state achieve its goal by introducing a policy on the installation of offshore wind farms.

Meanwhile in Japan trading firm Marubeni Corp (TYO:8002) won an order to construct 145 MW of wind farms off the coast of Akita. The two parks, of 65 MW and 80 MW, are expected to begin commercial operations as early as 2021.

Japanese industrial group Hitachi Zosen Corp (TYO:7004) also confirmed on Friday it won, as part of a consortium, the bid to develop the 220-MW Iwafune wind project off the coast of Niigata prefecture. The public bidding was held by Murakami City.

In the solar sector Canadian Solar Inc (NASDAQ:CSIQ) announced on Tuesday it has agreed to acquire Sharp Corp’s (TYO:6753) US solar unit Recurrent Energy in a deal worth USD 265 million (EUR 233.6m). Canadian Solar noted that the target has 1 GW of projects to be built before the US solar investment tax credit (ITC) drops in 2016.

Last in this week’s Friday Note comes the news that Guatemala has opened a photovoltaic (PV) power plant of 50 MW in Chiquimulilla, Santa Rosa department. The project by local firm Horus Energy envisages a second phase to bring the total capacity at the site to 90 MW.