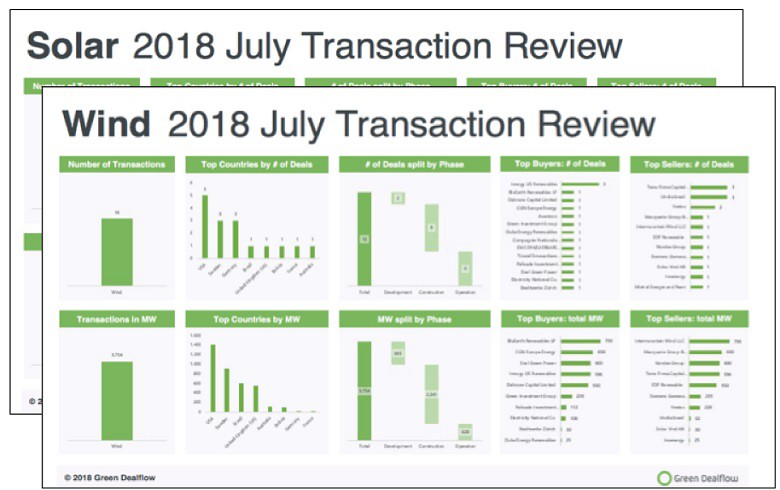 In the solar industry, the report records 12 transactions amounting to approximately 2.3 GW in gross capacity transacted. Following a strong performing June with 10 transactions for an overall 2.4-megawatt solar portfolio, July continued strong performance in solar energy deal flows. That was primarily thansk to Silk Road Funds acquiring a 24% stake in the asset of ACWA Power, a development project in Dubai. The 700-megawatt concentrated solar power (CSP) project, the largest single-site CSP plant in the world, will be jointly developed by Silk Road Fund, the Dubai Electricity and Water Authority and Saudi Arabia's ACWA Power. This significant transaction secures the leading position of the United Arab Emirates on the countries ranking list in terms of MW transacted. The United States of America follows with 680 MW in four transactions.

Тhe wind industry recorded 16 transactions amounting to approximately 3.7 GW in gross capacity transacted, the vast majority of which is construction-phase projects. The USA is leading the country ranking the same as June regarding the number of transactions with a total of five transactions. There were six transactions in the development stage and two transactions in the operation stage. About capacity transacted USA is leading with 1416 MW, followed by Sweden with 915 MW. The total capacity in comparison to the previous month went up by approximately 54%. The growth was mainly due to BluEarth Renewables Developing a 795 MW Wind Development Portfolio in Wyoming, USA.  The company wants to strengthen its position in the USA, and this latest acquisition comes after the recent addition of 80% interests in two operating wind facilities in Minnesota.