I met Hydrogenious at the World Hydrogen Congress in Rotterdam a few days after they announced plans to transport up to 8,000 tonnes of green hydrogen per year from Sweden to Germany and the Netherlands by 2026 in a project called “Northern Green Crane”.

At the event, some of the presentations and discussions kept mentioning ammonia, ammonia and ammonia as the likely carrier of choice for hydrogen transport. This is something we have done for decades, so why not? Hanna Liebich, Business Development Manager at Hydrogenious LOHC Technologies, raises a key question here: What do non-stakeholders have to say about this?

Betting on green hydrogen as a key solution for decarbonisation, the world would need to produce, store and transport a lot of it in the coming decades. Are we really ready to put so many eggs in the "ammonia-is-best-for-H2-transport" basket and drop the search for safer alternatives?

Would people living near ports love the idea of huge amounts of ammonia arriving and parking there?

How does this work?

We use benzyltoluene – a thermal oil that is commercially available – as the carrier medium that chemically binds the hydrogen molecules to allow safe transportation and storage. The resulting oil is easy to pump, easy to handle and you do not need to apply high pressure or keep it at low temperature. You could store our LOHC on the shelf if you like.

How do you recover the hydrogen after transportation?

Simply put, in our dehydrogenation plant we apply heat to release hydrogen from the LOHC in an endothermic reaction. The loaded LOHC flows along the reactor tubes, while releasing hydrogen, which then can be used by industrial off-takers. The LOHC itself is reusable for several hundred cycles, comparable with the transport on a pallet. 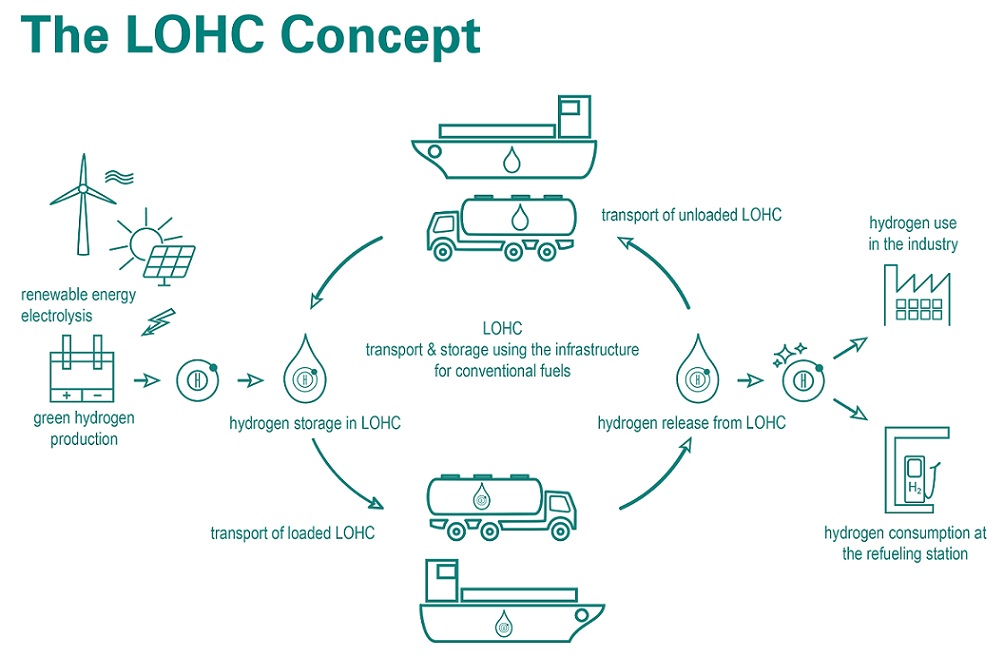 Have you deployed the technology already?

We do have several implemented projects. H2 Mobility for example opened a hydrogen refuelling station in Erlangen this summer, to which we supply hydrogen with our LOHC in a demo-sized project.

What we are mainly focusing on as a company right now are industrial-sized projects. We are working on the first commercial-size plant with 5 tonnes of hydrogen per day to be stored using the LOHC technology in Chempark Dormagen, Germany. This plant will be on stream in 2025.

As part of the Northern Green Crane project, Hydrogenious will build a 24-tonnes-per-day hydrogenation plant in Sweden to store green hydrogen in LOHC. From Sweden, the LOHC will be transported by ship to Rotterdam in the Netherlands and by barge via the river Ems to Lingen in Germany, where the green hydrogen is released for industrial off-takers. We also work on even larger-scale projects with LOHC - I am talking about volumes of 100, 200 and even 500 tonnes of hydrogen to be stored and released per day for imports and exports.

What is Hydrogenious’ current geographical focus?

We have quite a few projects in Germany already and have established a number of partnerships there and worldwide. We are working on Pan-European hydrogen transport chains, have a joint venture in the UAE and are also exploring opportunities in North and South America among others.

Mentioning other continents, does the technology work for long-distance transportation?

Shipping is a perfect match, actually. Even if the LOHC spends 20 or more days at sea there are no hydrogen losses. Compared to compressed hydrogen, we do need far less space for transportation. In comparison to ammonia the space requirement is a bit higher, but in terms of safety and easy handling, LOHC is far superior.