January 16 (Renewables Now) - Horizon Power, a state government-owned power provider in Western Australia, is investigating the possibility of installing a solar-and-hydrogen demonstration microgrid in the coastal town of Denham.

The company has sought expressions of interest (EoIs) for the supply of a hydrogen electrolyser and fuel cell, and the plant’s design and construction. Construction would start in February 2021 if the project is determined to be viable, Horizon said on Wednesday.

Denham is home to roughly 500 people. Their power today comes from a diesel facility owned and operated by Horizon Power and a wind farm. Both are approaching the end of their operational life so the utility is preparing to install a system combining solar, wind and diesel power generation to power Denham.

The hydrogen demonstration project is planned to use an electrolyser to turn solar power into hydrogen, which will then be stored in a fuel cell to produce electricity around the clock. It will support the Western Australian Renewable Hydrogen Strategy.

“Proving the reliability of such a hydrogen plant provides the opportunity to expand the plant to supply the full power requirements for the town in the future,” said Horizon CEO Stephanie Unwin. 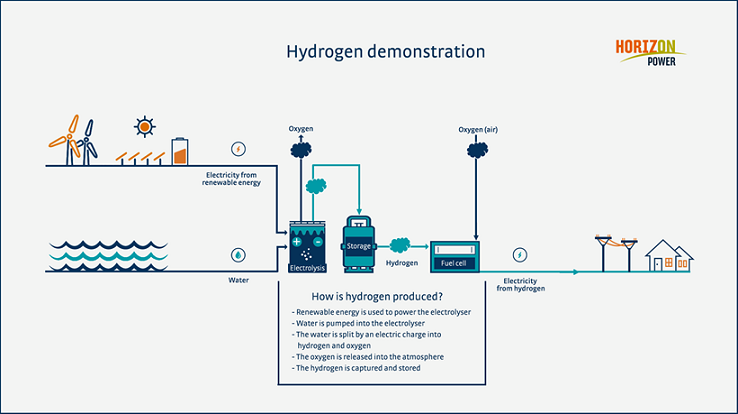