BP REVIEW - China beats US in renewables for 2016 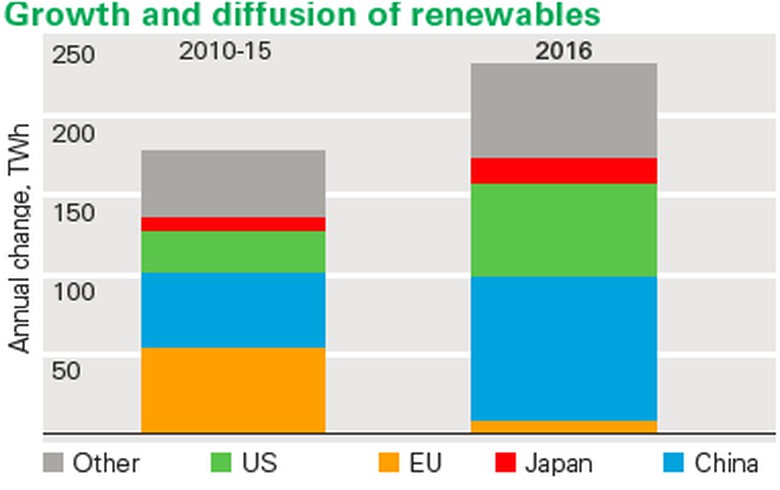 June 15 (Renewables Now) - Non-hydro renewable power generation in 2016 grew by 14.1% or 53 million tonnes of oil equivalent (mtoe), with China overtaking the US as the largest single producer, shows the BP Statistical Review of World Energy 2017.

When biofuels are added to the calculation, renewable energy was up by 12% or 55 mtoe.

Renewables growth was below the 10-year average, but still renewable energy was the fastest growing energy source. Wind accounted for more than half of renewables growth, but solar energy is catching up. It contributed almost a third. More specifically, wind grew by 15.6% or 131 TWh, while solar rose by 29.6% or 77 TWh.

The share of renewable power within primary energy inched up slightly to 3.2%, according to BP’s report.

The also report shows a 1.5% increase for both oil and natural gas in 2016, by 75 mtoe and 57 mtoe respectively. Natural gas grew considerably slower than its 10-year average. Meanwhile, coal consumption was down by 1.7% or 53 mtoe and the share of coal in primary energy reached its lowest level since 2004.

“There may be further ups and downs in the fortunes of coal over coming years, but the weakness in recent years does seem to signal a fairly decisive break from the past,” says the report.

In 2016 non-OECD countries accounted for 62.4% of global CO2 emissions. Details on the emitters that saw the most significant increases and decreases are in the table.