Wind accounts for 8% of US power capacity - EIA 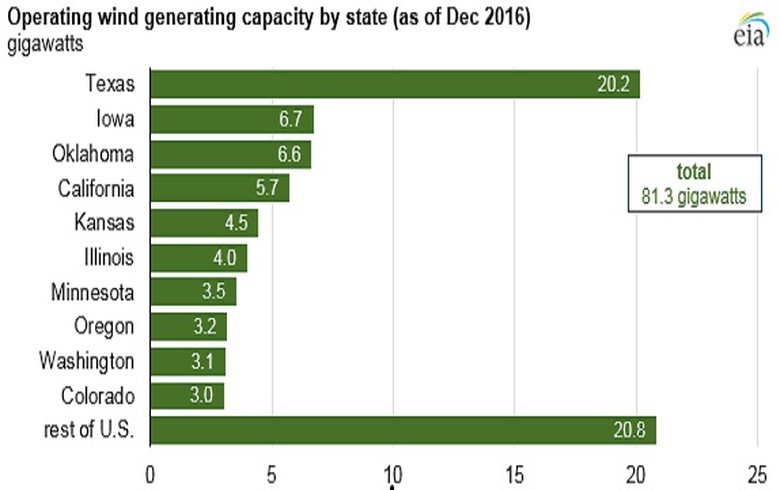 May 4 (Renewables Now) - Wind turbines made up 8% of the US electricity generation capacity in operation in 2016, data of the US Energy Information Administration (EIA) shows.

Wind has now achieved a higher share in the country's generation mix than any other renewable energy source, including hydroelectricity. More than one third of the 200 GW utility-scale power capacity added in the US over the past decade came from wind turbines.

EIA has previously said that wind capacity exceeded hydro capacity at the end of 2016. The US had about 81.3 GW of wind facilities and about 80 GW of hydro in December 2016.

While representing 8% of the generation capacity, wind provided a lower share of 5% of US' electricity output in 2016 due to its relatively low capacity factors, EIA notes.

Five states -- Texas, Iowa, Oklahoma, California and Kansas -- host more than half of the country's wind capacity, with Texas being a distant leader with 20.2 GW, as of December 2016. In Iowa, Kansas, and Oklahoma wind accounts for at least 25% of in-state utility-scale capacity.

In Texas, 13% of the state's electricity output last year came from wind. When winds are strong, however, the technology can provide a much higher percentage. Wind penetration on the Electric Reliability Council of Texas (ERCOT) grid in the state reached a high of 50% in the early hours of March 23, 2017.