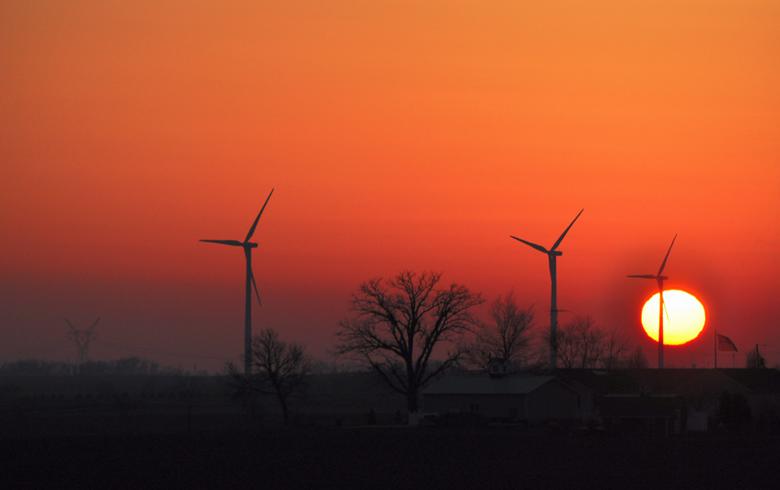 April 26 (Renewables Now) - New electricity generating capacity in the US is brought online throughout the year, but December has historically been the most significant month for both onshore wind and solar photovoltaic (PV) capacity additions, according to an overview by the US Energy Information Administration (EIA).

Over the past nine years (2010–2018), 43% of all onshore wind capacity and 33% of all solar PV capacity have been added in December. US wind and solar capacities receive a production tax credit (PTC) and an investment tax credit (ITC), respectively, which may provide incentives to come online at the end of the year. 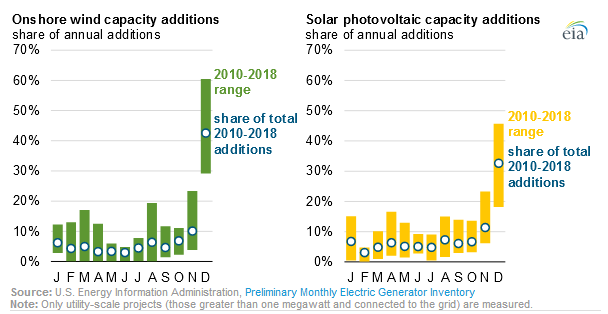 Capacity additions for other technologies in the US (all utility-scale electricity generation from sources besides wind, solar PV, and natural gas) are more evenly distributed throughout the year.

Historically, 2012 had the most onshore wind capacity additions with 13.1 GW installed in total, 5.1 GW of which were installed in December. The PTC—which provides a tax incentive per MWh generated by a qualifying technology in the US for 10 years—initially expired at the end of 2012, leading developers to accelerate projects to bring them online before the end of the year. Although the PTC was renewed as part of the American Taxpayer Relief Act of 2012 signed on January 2, 2013, accelerated wind capacity additions in 2012 led to fewer additions in 2013. Still, most wind additions in 2013 occurred in December.

Solar PV experienced its largest single month of US capacity additions in December 2016 with 3 GW added, almost twice as much as the next largest month for capacity additions (December 2017, with 1.6 GW installed). Similar to the PTC, the investment tax credit (ITC) was initially set to expire at the end of 2016. The Consolidated and Further Continuing Appropriations Act, passed on December 16, 2015, extended full ITC eligibility for utility-scale solar PV projects into the 2020s, and it decreased the ITC to 10% indefinitely. 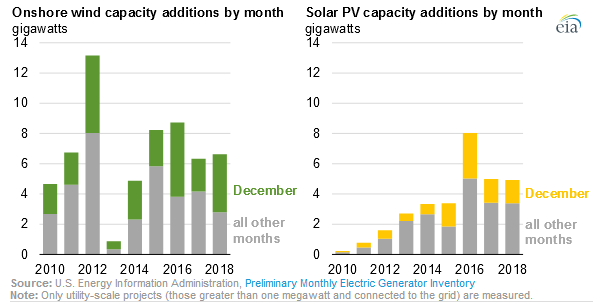