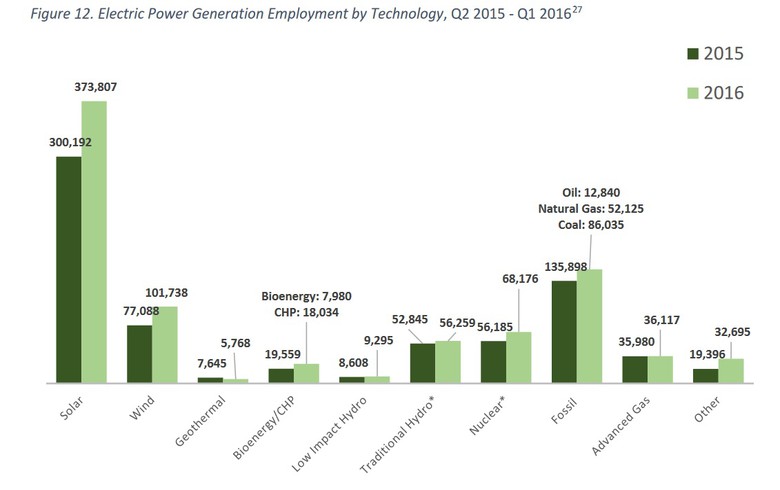 Source: US DoE's 2017 US Energy and Employment Report (USEER)

January 16 (SeeNews) - Solar jobs in the US increased by 25% in 2016, while wind employment grew by 32%, according to the Department of Energy's (DoE) 2017 US Energy and Employment Report, released on Friday.

The report has found that almost 374,000 people work for solar firms, with more than 260,000 of them spending most of their time on solar. The wind sector employs another 102,000 workers.

The leading states for solar and wind employment are California and Texas, respectively. A total of 41% of the solar jobs are concentrated in California, while 24% of the wind workers are in Texas.

The American Wind Energy Association (AWEA) says the DoE data validated its own figures. AWEA estimates that US wind jobs grew 20% in 2015 to 88,000. It said wind employment should have grown significantly in 2016 given near-record wind capacity under construction and recent wind manufacturing facility expansions in states like Colorado, Florida, Texas and Wisconsin. AWEA is to release its jobs figures in the spring.

Overall, the Traditional Energy and Energy Efficiency sectors employ about 6.4 million people in the US, a rise of just under 5%, according to the DoE report. The report can be downloaded here.