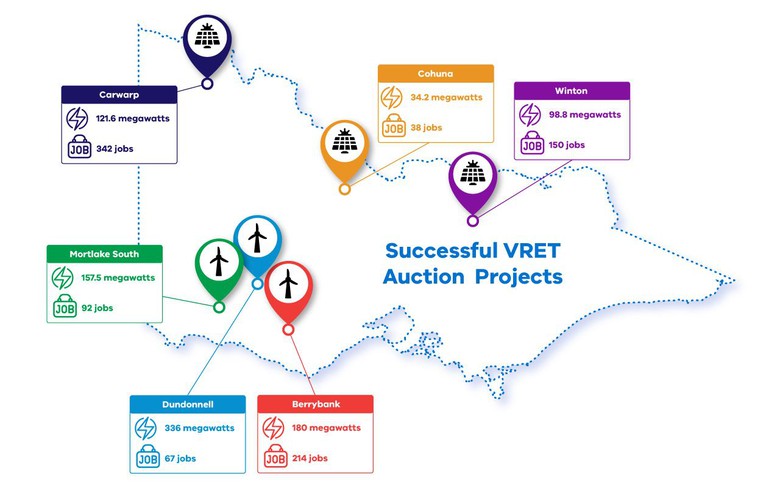 The capacity that will be delivered as a result of the tender exceeds by almost 45% the tender's initial target of 650 MW, the state government noted in a statement. Successful projects are awarded 15-year support agreements with the state. The auction actually contracted 669 MW, but thanks to this support projects have agreed to build an additional 259 MW.

Tilt Renewables Ltd, for example, secured a support agreement covering 37% of the output of its 336-MW Dundonnell wind project.

The winning projects include three wind farms with a combined capacity of 673.5 MW and three solar farms totalling 254.6 MW. The full list is in the table below.

The Victorian government expects the solar projects to be online by early 2020, while the wind farms are to be up and running before the end of September 2020. The six facilities will spur AUD 1.1 billion (USD 784m/EUR 673m) of economic investment in regional Victoria and create over 900 jobs, including 270 apprenticeships and traineeships.

The 928 MW of power plants, once operational, are estimated to generate almost 3 million MWh of electricity per year, accounting for 6.2% of annual Victorian generation and helping to push down not only greenhouse gas emissions but also power prices.

Ahead of state elections in the Victoria in November, the government said that the Liberals have committed to scrap the Victorian Renewable Energy Targets (VRET) despite of the benefits they are expected to deliver in terms of investment and jobs.

The auction had attracted wind and solar projects with a combined capacity of more than 3.5 GW, the state’s energy minister Lily D’Ambrosio was cited as saying by media in April.