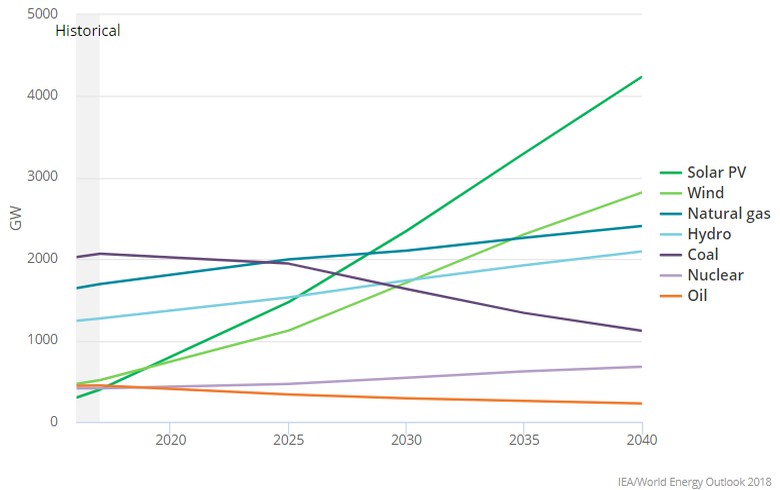 November 14 (Renewables Now) - Solar photovoltaics (PV) will gradually surpass most other power sources around the world in terms of installed capacity over the next 20 years and in one scenario even become the leader, hitting 4.24 TW in 2040, a new report shows.

The International Energy Agency (IEA) released on Tuesday its flagship publication, World Energy Outlook 2018, which presents a scenario-based analysis of the different possible futures for the energy system across all fuels and technologies. The report includes a Current Policies Scenario (CPS), which only considers the impact of policies and measures that were in place as of mid-2018; a New Policies Scenario (NPS), which incorporates all current policies and measures as well as those that have been announced; and a Sustainable Development Scenario (SDS), which shows the way towards achieving the internationally agreed objectives on climate change, air quality and universal access to modern energy. There is also the Future is Electric Scenario, developed specifically for the WEO 2018 with a focus on electrification.

IEA has picked NPS as its main scenario and says that in it the picture is brighter compared to that associated with CPS, but notes that there is still a huge gap between NPS and SDS, the latter seeing the world on track to meet its climate change goals.

In NPS, coal-fired power generation has the most installed capacity up until the mid 2020s, when it gets overtaken by natural gas. According to IEA’s analysis, it will take nearly 20 years for solar PV to surpass coal in terms of installed power generating capacity.

The table below presents the estimated installed capacity by source through 2040 in the NPS scenario.

While in NPS solar PV falls short of becoming number one, that is what happens in SDS, where it leaves wind power second in terms of capacity with a huge lead. Still, when it comes to power generation wind is the leader in SDS with 7,730 TWh, while solar PV produces 6,409 TWh in 2040.

More details about the installed power generating capacity of each source in SPS are available in the following table.

In SPS, the world pursues all economically viable avenues to improve efficiency and keeps overall demand in 2040 at today’s level. IEA points out that in this scenario electrification of end-uses grows strongly, just as the direct use of renewables, such as bioenergy, solar and geothermal heat, for heat and mobility. The result is that the share of renewables in the power mix jumps from one-quarter today to two-thirds in 2040. In heat, it increases from 10% today to 25% in 2040 and in transport, including both direct and indirect use, it climbs from 3.5% today to 19%.