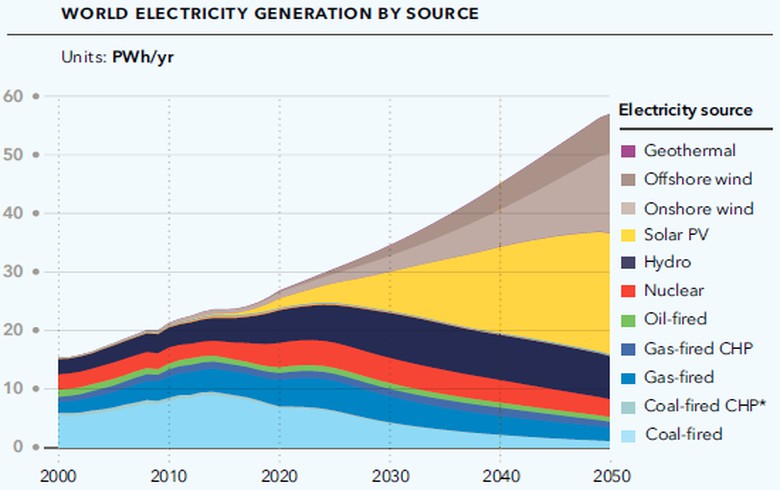 Sep 5 (Renewables Now) - Solar photovoltaic (PV), onshore wind, hydro and offshore wind power plants will be producing some 85% of global electricity in 2050, and the share of renewables in the world’s energy mix will come near 50%, says DNV GL’s Energy Transition Outlook.

Final energy demand in 2050 is expected to arrive at 430 exajoules (EJ), as compared to 400 EJ in 2015. The quite modest increase of some 30 EJ will actually happen prior to 2030, and demand will flatten after that year. Demand growth will slow down due to decelerating population and productivity growth, greater strides in energy efficiency, and increased electrification such as in the heating and transport sectors. Electricity consumption is projected to jump by 140%, becoming the largest energy carrier, followed by gas.

“The profound change set out in our report has significant implications for both established and new energy companies. Ultimately, it will be a willingness to innovate and a capability to move at speed that will determine who is able to remain competitive in this dramatically altered energy landscape,” commented Remi Eriksen, CEO of DNV GL.

The quality assurance and risk management company says renewables and fossil fuels will have an almost equal share of the energy mix by the middle of the century.

The Energy Transition Outlook says that coal use has already peaked, while oil demand is set to flatten from 2020 through to 2028 and start falling fast after that. Gas, meanwhile, is on track to surpass oil in 2034 to become the single biggest energy source.

Wind power and solar PV will drive the strong growth in renewable energy, and hydro will remain a key source. DNC says that solar PV and wind costs are to go down by 18% and 16%, respectively, per the doubling of capacity. Renewables will improve cost performance at a much faster rate than oil and gas, benefitting from the ‘learning curve’ effect.

Electric vehicles (EVs) are seen to achieve cost parity with internal combustion vehicles in 2022. By 2033, DNV says that roughly 50% of new light vehicle sales globally will be electric.

With all that said, total energy-related carbon dioxide (CO2) emissions in 2050 are seen fall to around half of today’s level. Still, the planet is expected to warm by 2.5 degrees Celsius, which means that the goal of the Paris Agreement will not be achieved. "This should be a wake-up call to governments and decision-makers within the energy industry. The industry has taken bold steps before, but now needs to take even bigger strides,” Eriksen adds.