Swiss software and advisory services company Pexapark this week announced the launch of a new free-to-use community platform that allows renewable energy-focused businesses to virtually meet and communicate their activity.

The platform, called PexaConnect, allows companies with closed power purchase agreements (PPAs) to fill in the database, indicating who has been involved in the transaction, not just the buyers and sellers. It acts as a collaboratively updated industry directory that shows who is actively involved in PPAs and which companies are exploring the market.

Pexapark’s CEO Michael Waldner describes the platform as “a LinkedIn for renewables.” The solution’s beta version was trialled by more than 60 executives from renewable energy buyers and sellers to consultancies.

Among these beta users were representatives of German energy companies Innogy and VSB Group, as well as Danish wind turbine manufacturer Vestas. While Zurich-based Pexapark has so far primarily focused its own activity on European markets, its PexaConnect platform is open to sector players in any part of the world.

“We’re confident that this platform will help keep up the momentum of the PPA market beyond face-to-face meetings and conferences. This will be particularly critical in the coming weeks given current global disruption,” Waldner stated.

The company noted that PexaConnect’s beta users have found the platform to be useful during times of travel restrictions around the world, and that some of the users who are new to the PPA market see potential in it to become an educational resource.

Waldner’s prediction is that subsidies will not come back as a trend for renewables and power producers will need to sell their output into the market. “It is just a new reality that the players will need to adapt to,” he told Renewables Now.

According to data obtained from Pexapark’s separate pricing software, PexaQuote, last month in particular there has been a steep drop in the prices of renewable energy in a number of markets, including France, Great Britain, Germany, Spain and Italy, reflecting the global pandemic caused by the COVID-19. Waldner, though, pointed out that the coronavirus crisis is just one factor that affected the market, another being the oil price crush.

“So basically you see a decrease on the power side of maybe 30%-40% compared to mid-year and that change is obviously quite dramatic,” he said.

From the start of April, however, a significant uptick in the price of renewables has been noticed in Europe, PexaQuote data shows. 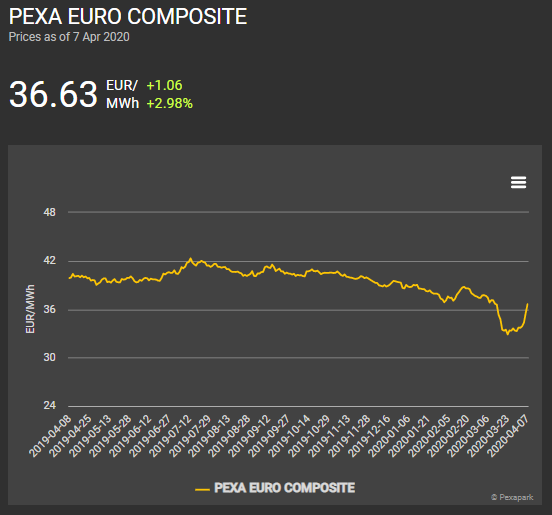