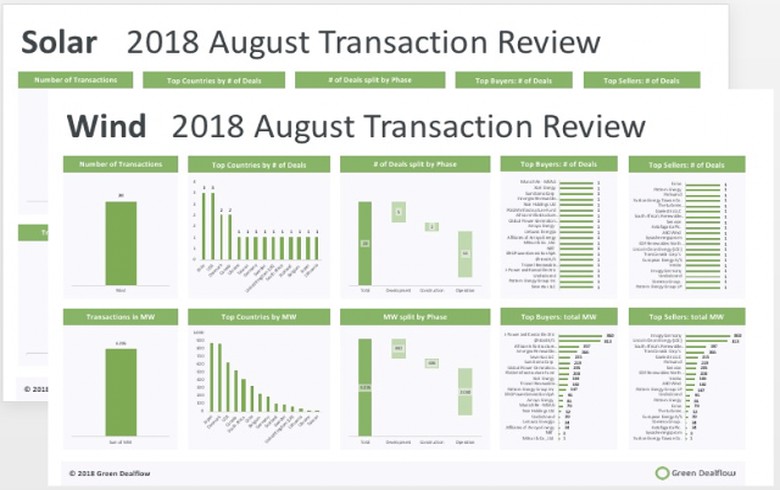 With 15 transactions, August continued the strong performance in the solar energy deal flows from July, mainly thanks to five transactions taking place in the United States amounting to 525 MW. These secured the leading position of the United States on the countries ranking list in terms of MW. Singapore followed with 500MW of transaction where Green Investment Group (GIG) from the United Kingdom acquired the Asia-Pacific solar portfolio from Conergy.

In the wind industry, Green Dealflow’s report shows 20 transactions amounting to roughly 4.2 GW gross, the vast majority of which is operation-phase projects. Japan is leading the country ranking with two of Japan's biggest power companies buying around 40% of a German-owned developer of offshore wind farms in the United Kingdom, seeking to learn from Britain's lead in this sector and bring the know-how back home. This transaction is closely followed by a Danish power giant Orsted acquiring 813MW onshore wind portfolio eying the growth in the USA. The total capacity in comparison to the previous month went up by approximately 12%. The percentage increase in July was a 54% increase from June, therefore overall growth trajectory over the summers.

The full monthy report can be accessed here.