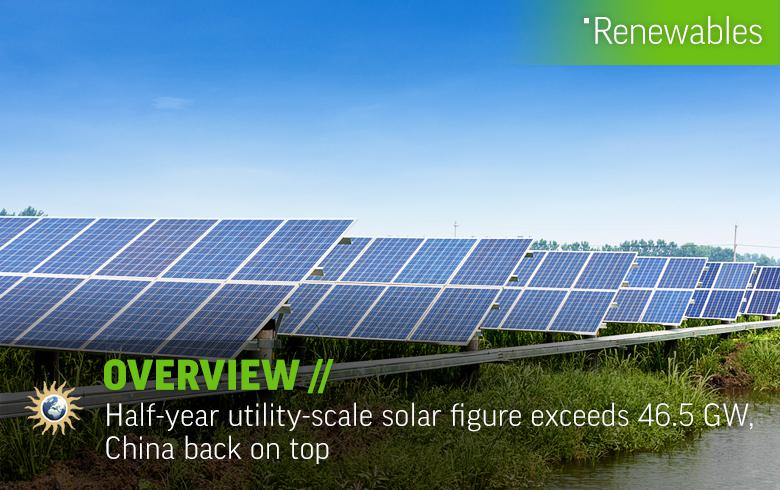 In this month’s update Philip Wolfe reviews the half-year figures for global utility-scale solar installations, based on Wiki-Solar’s database.

July 27 (SeeNews) - One of the problems in commentating on sectors with explosive growth, is that the minute you publish figures they are already out-of-date! Wiki-Solar issued its first estimate of the half-year figures just two weeks ago showing 45 GW of cumulative installed capacity, with the USA as top country. Since then India has issued an update on Phase 2 of its National Programme, and we have analysed the latest official figures from the Energy Administrations in China and Chile (the former also updating its data for 2013).

So the global capacity at the end of June actually exceeded 46.5 GW, and China is back as top country. But there are many noteworthy developments further down the ‘league table’.

Having leapt to third place in March, the UK is now making slower progress, while Germany has ended a period of stagnation and is starting to install capacity under its new tender process. It looks like only a matter of time before both countries are overtaken by India, which has now burst through 3 GW, and has a pipeline of at least 8 GW, even taking a conservative view on the frequent ‘blue sky’ announcements.

Remember, just five years ago Spain topped the table, and we still see it as the country to match for those wanting to be seen as serious players. Canada, Japan and France are all poised to do so. Japan in particular is working steadily through an ever growing pipeline, now about 2 GW. France will leapfrog Spainlater this year, when it completes Europe’s largest project – 300 MW at Cestas.

Chile has given us the opposite problem to China; we have previously overstated its capacity because some projects have connected later than expected. Nonetheless it’s just a matter of time before its huge backlog takes Chile into the multi-GW club. South Africa too will soon top 1 GW.

Further down the table, Honduras has made great progress with six new projects connected this year. We have extended the list to 25 countries this time in deference to colleagues in Australia, which normally falls off the bottom. Completion of the Nyngan project has now taken it over 100 MW, and other planned projects should continue this growth, provided that the regulatory environment remains reasonably stable.

We have already written about the completion of Solar Star, the world’s largest project. Other large recent completions have been the 130-MWp Grand RE in Canada, 80-MWp Tahara Mega in Japan, a 100-MWp projects in China at Xilin Gol and the 50-MWp plant at Dammakhedi in India.

It has been confirmed that the 69-MWp project at the RAF base at Lyneham became the UK’s largest operating solar power station when it was connected in March.

The table above shows how few countries have yet achieved 1 GW of capacity. Even more impressive is the handful of provinces and states, which have done so on their own. Congratulations to North Carolina, which has just joined the select band of California, Gansu, Qinghai, Xinjiang, Brandenburg, Ontario, Inner Mongolia, Ningxia and Arizona.

All the details in these posts are based on the Wiki-Solar Database of some 4,500 utility-scale PV solar projects around the world. Unless otherwise stated, capacities are expressed in terms of the alternating current (AC) output of the plant, and ‘utility-scale’ is defined as projects of 4 MW AC and over.

Remember what I said at the start of this article – all of these figures are probably already wrong!