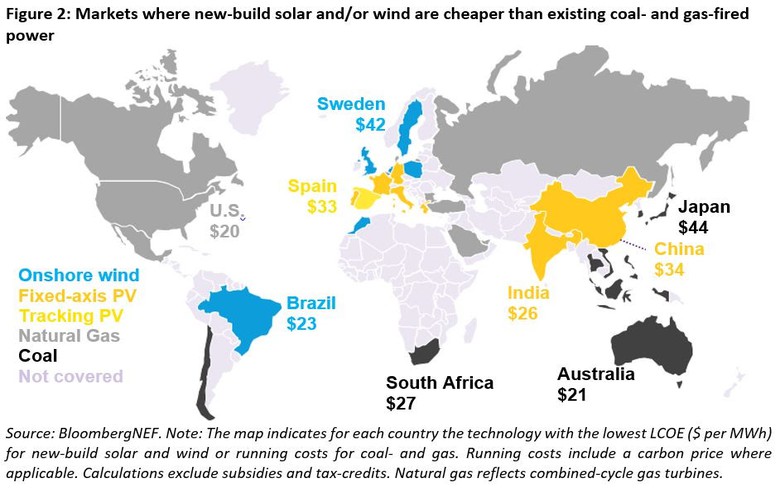 June 24 (Renewables Now) - China, India and most of Europe can already enjoy solar power generation that is cheaper than coal-based electricity, according to the latest LCOE Update by BloombergNEF (BNEF).

Tifenn Brandily, lead author of the report and associate at BNEF, commented that “the economic incentive to deploy large amounts of solar power just got stronger in India, China and most of Europe.”

The report says that in the first half of 2021 the global benchmark levelised cost of energy (LCOE) for utility-scale solar photovoltaic (PV) and onshore wind has dropped by 5% and 7% on the year to USD 48 (EUR 40.2) and USD 41 per MWh, respectively. At USD 22/MWh, the lowest LCOEs during the period were registered in Brazil and Texas for onshore wind and in Chile and India for PV.

Meanwhile in Europe, the cost of solar can vary from USD 33/MWh in Spain and USD 41/MWh in France to USD 50/MWh in Germany. For comparison, the typical running costs for coal and gas-fired power plants in the region surpass USD 70/MWh this year.

However, some commodities needed in the production of wind and solar have surged over the past months as economies are starting to reopen. As a result, BNEF said it has tracked PV module price increases of 7% in China and 10% in India since the second half of 2020. Similarly, the prices for wind turbines in India have gone up 5% over the last six months.

“The rise in commodity prices has not resulted in an increase in our global LCOE benchmarks for solar and wind just yet. But if sustained through the second half of 2021, this rise could mean that new-build renewable power gets temporarily more expensive, for almost the first time in decades,” said Seb Henbest, chief economist at BNEF.

Still, BNEF notes that it is manufacturing and not materials that form the majority of the final costs for wind turbines, PV panels and battery packs. Also, a portion of the increase is expected to be absorbed by the supply chain and, at the same time, longer-run purchase orders can protect some developers from the spike for a while.