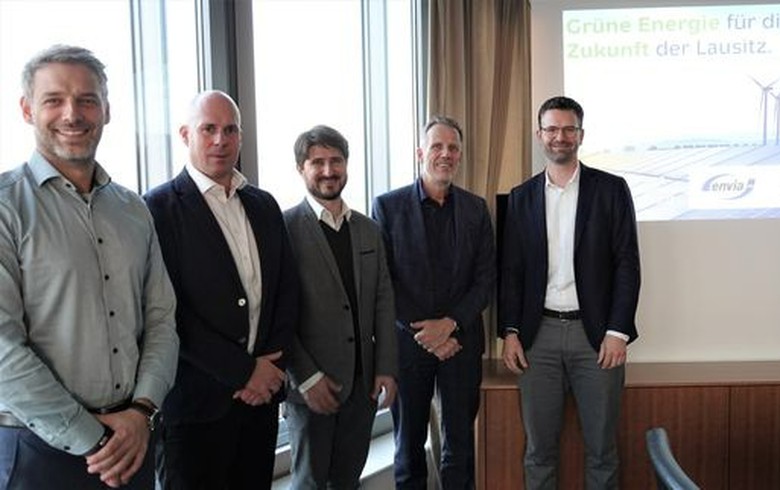 Representatives of LEAG, enviaM and EPNE agree to partner on wind and solar projects in Lusatia, northeast Germany. Image by LEAG.

As part of the cooperation, wind and solar parks with a nominal capacity in the three-digit megawatt range will be built in the medium term mainly in post-mining areas in Lusatia, LEAG said earlier this week in a press release.

The first projects to be realised by the partners include a solar farm and a wind park in the Janschwalde mining area.

To support the implementation of the projects, LEAG will acquire 50% of the shares in enviaM's subsidiary EEL Erneuerbare Energien Lausitz GmbH & Co. KG, based in the city of Cottbus. The transaction is still subject to approval by the Federal Cartel Office.

The partnership with enviaM supports LEAG's ambitious plan, unveiled at the end of September, to install 7 GW of renewable energy capacity in the Lusatia mining areas by 2030. Known as the GigawattFactory, the strategy envisages energy storage solutions, green hydrogen as well as wind and solar power plants to be built in Lusatia in order to make environmentally friendly energy available in the region. LEAG and EPNE are already working on a number of projects in the region such as a 300-MW solar park on the recultivation area of the Welzow-Sued opencast mine and a project for a 200-MWp solar plant in the Dissen-Striesow municipality.

The cooperation with enviaM is an important element in the development of Lusatia into Germany's largest green energy centre because a project like the GigawattFactory requires strong partners to pool skills and resources, said LEAG's chief executive Thorsten Kramer.