Collective global ambitions on renewable energy are not enough to keep temperature increases below 1.5 degrees C, the International Renewable Energy Agency (IRENA) warned on Monday as it released a new report at COP27 in Egypt.

According to the report, entitled "Renewable Energy Targets in 2022: A guide to design," renewable power targets for 2030 would need to double for the world to remain on track for carbon neutrality by 2050.

Existing renewable energy targets in the power sector aim at 5.4 TW of installed capacity by 2030, well below the 10.8 TW needed according to IRENA’s 1.5 degrees C Scenario. In this scenario, half of the total energy consumed in 2050 comes from electricity, 90% of which is renewable.

Doubling renewable power targets would be feasible as current ones are equivalent to adding 259 GW a year in the next nine years, which is below the almost 261 GW of annual additions already seen in 2020 and 2021, the agency said.

Non-ambitious targets could in fact become a cap on renewables, its report warns.

IRENA’s director-general Francesco La Camera said that the energy transition is far from being on track and called on world leaders to close the renewables deployment gap. “IRENA’s report is a warning to the international community telling them that renewables offer a readily achievable climate solution but require immediate action. Climate pledges must enhance ambition to unlock the full and untapped potential of renewables,” said La Camera.

IRENA’s analysis shows that 183 parties to the Paris Agreement have renewable energy components in their Nationally Determined Commitments (NDCs). Of these, 143 have quantified targets mainly focusing on the power sector, while only 12 countries have energy mix targets.

The need for immediate action to scale up renewable energy ambitions is underscored by recent geopolitical tensions and evidence of rising temperatures, the agency noted. 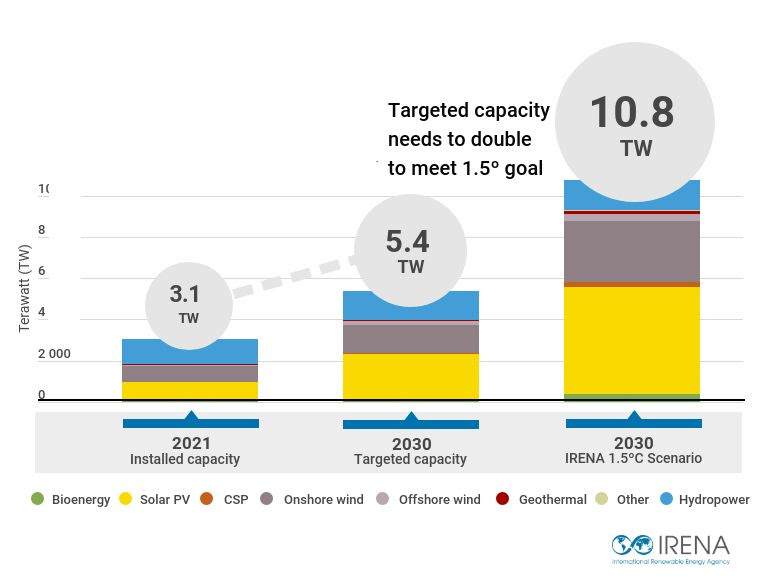