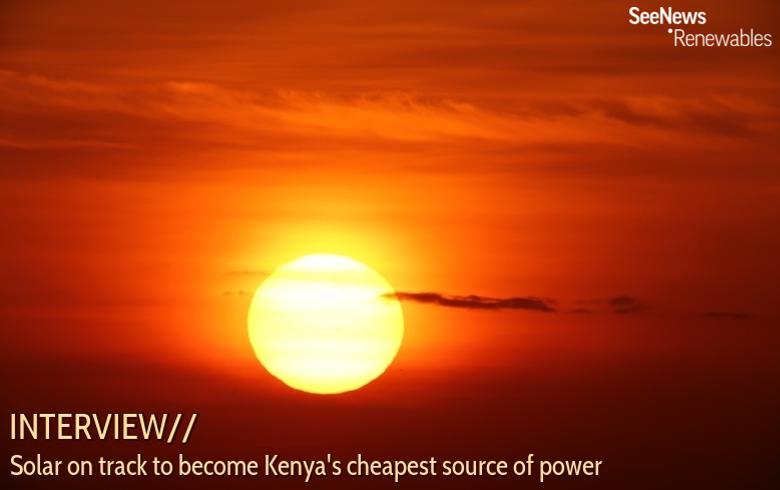 December 2 (SeeNews) - Kenya can easily achieve at least 10% solar power in the energy generation mix by 2025 with photovoltaics becoming the cheapest electricity source in the country, renewable energy entrepreneur Sebastian Noethlichs tells SeeNews Renewables in an exclusive interview about doing clean energy business in the country.

In terms of added capacity, this translates into 150 MW to 250 MW of new photovoltaic installations in the country. Kenya currently has an installed capacity of about 1,500 MW, only 2 MW of which is solar.

“I expect this figure to rise to around 50 MW over the next 3 to 5 years. Ultimately, with well over 1,000 MW of additional, conventional power plants in the pipeline, I expect that Kenya will reach somewhere around 10% of solar as share of installed capacity by 2025. I’m fairly confident in this guess simply because it makes macro-economic sense for the country. Solar, so long as it can be integrated and balanced, hence the 10% estimate, will be the cheapest source of power for Kenya,” the owner of solar power provider Nvision Energy says.

Nvision Energy has re-focused from subsidised, government-supported markets, to markets in which it can develop purely demand-driven, commercially viable renewable energy. The company now delivers clean power to emerging markets through cost-effective solutions ranging from investment free sale of renewable electricity, over co-investments, to the outright sale of power plants. It has offices in Bulgaria, Kenya and Pakistan and also runs the Freesolaraudit.com website which helps clients get a rough estimate of the solar potential of prospective sites.

TAKING THE LEAP TO EMERGING MARKETS

The decision of going to Kenya was motivated by Nvision Energy’s desire to work in a market where it can compete outright commercially. “The lesson from one country after another (Bulgaria, Czech Republic, Germany, Greece, Italy, Poland, Spain, Romania), has been that you cannot rely on any of these support schemes to actually last and play out as promised,” Noethlichs says.

So, having had enough of feed-in tariffs, quotas, certificates and the likes in markets where government incentives or policy are the main driver behind solar energy, Nvision started looking for new, demand-driven energy markets where:

1) solar resource is more than abundant;

2) commercial electricity prices are high or at least not subsidized to an artificially low level by the government,

3) and last, but not least, where rules and regulations allow for the onsite generation and use of solar power (if not even net-metering).

“Most northern and southern countries get too little sun and many equatorial countries have too much cloud cover throughout the year. A lot of the remaining countries feature extremely low electricity prices. Some because they actually have access to abundant, cheap hydro power like Nicaragua. Others because they blow huge amounts of public funds (often oil and gas revenue) on keeping electricity prices artificially low like in Nigeria or Oman.

“Solar power plants in Kenya can produce between 1,600 and 2,400 kWh per kW of installed capacity per year. That’s double to triple of what one could get in England and still 50% to 100% more than southern Europe,” Noethlichs says. At the same time, commercial and industrial consumers pay between USD 0.12 (EUR 0.113) and USD 0.20 (EUR 0.189) per kWh of electricity. Consumers are very keenly aware of how much they spend on electricity and smart energy auditing requirements help further this awareness. So, for big consumers like factories, shopping malls, hotels and business centres, it makes perfect sense to go solar as photovoltaics can beat the grid prices and significantly cut the bill.

“And all that, without subsidies,” Noethlichs notes.

That said, commercial solar is still a very new thing to most African markets, the owner of Nvision Energy adds. “There’s a lot of talk about solar but it’s all solar lanterns, micro solar and off-grid solar. In fact, Nairobi, is crawling with NGOs and social enterprises, all trying to compete in the ‘solar lantern replaces kerosene lamp’ market.”

That is hardly surprising given the fact that some 75% of the population in Kenya is not connected to the grid. That’s roughly the average for sub-saharan Africa. For these folks access to electricity means having a light or two at night and being able to charge your phone – which is also your bank account – at home rather than having to walk, often to the next village, to get it charged. Here, the story is not of future MWs, but of access to electricity.

The industrial and commercial sector of Kenya's developing economy is the one that calls for grid expansion and new MWs of installed capacity.

ROADBLOCKS ON THE WAY

Commercial-sized installations market in Kenya still has few reference power plants to show and even fewer competitors vying for the attention of potential customers. “This means that the decision making process until a client actually signs up to our solar proposals is often very long compared to say, a market like Germany where solar has been around for decades and where you can hardly drive through a village without seeing a couple of solar plants”, Noethlichs says.

"Kenya and many of its neighbouring countries have very advanced bureaucracies. Business activities require a multitude of approvals and licenses. The import of solar equipment into Kenya involves more checks and approvals than importing into the EU’s single market. That means a lot of time and money is spent chasing after forms, stamps and signatures."

And, while in Africa hail is not a concern in terms of solar panels breaking, families of baboons chasing each other across solar panels can be…

“We have our first own solar lease plant shipping into the country at the moment and it will be operational by January,” Noethlichs tells SeeNews. “With that, the leap of faith required by future clients will become much smaller”.

Nvision Energy is also actively working on the Nigerian market with an office in Lagos. The new government in Nigeria seems to be eager to end fuel and electricity subsidies. If this happens, the market conditions in Nigeria will approach those of Kenya, though with a population that’s five times the size of Kenya’s.

Keeping an eye on the market in Rwanda and Uganda, as well, Nvision is principally quite excited about more challenging markets such as South Sudan and the eastern parts of the Democratic Republic of Congo. In both places diesel is the main source of electricity. Compared to that, the economics and payback that solar offers are phenomenal.

The challenge to going solar in Africa is to find the right clients and partners and to handle the logistics of getting the equipment there.