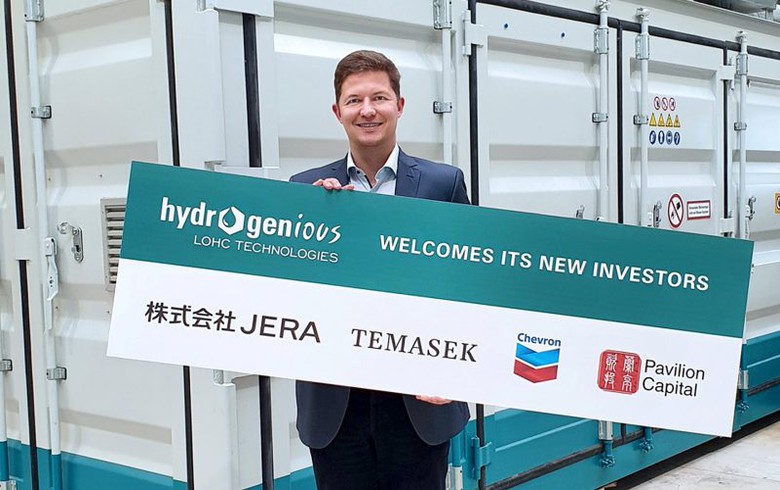 Image by Hydrogenious. All Rights Reserved.

September 14 (Renewables Now) - German hydrogen specialist Hydrogenious LOHC Technologies GmbH has raised EUR 50 million (USD 58.9m) in a funding round led by Jera Americas Inc and Singapore's Temasek to support the deployment and scale-up of its technology for hydrogen transportation and storage.

The fresh capital will be invested in the deployment of commercial systems into landmark hydrogen projects in Europe, the Middle East, as well as locations in Asia-Pacific and the Americas, using the company's liquid organic hydrogen carrier (LOHC) technology, Hydrogenious said on Monday.

The Erlangen-based company has developed the LOHC technology, which uses benzyltoluene as a carrier medium and adds hydrogen by a hydrogenation process, and this allows safe storage and industrial-scale transportation through the existing fossil fuel infrastructure.

“Moreover, as we scale up and grow the footprint of LOHC systems and technologies, we will not only develop and build turnkey plants, but also invest into our own LOHC plants and offer operation and maintenance services”, said founder and chief executive Daniel Teichmann.

Jera Americas, a unit of Jera Co Inc, has provided around EUR 15 million of the total capital in the latest round. The fundraise attracted new investors Chevron Technology Ventures and Pavilion Capital along with Temasek and was backed by existing investors such as AP Ventures, Royal Vopak and Winkelmann Group.