Hydroelectricity is most prevalent renewable source in 19 US states, wind in 16 Hydroelectricity represented the largest share of electricity generation among renewable sources in 28 states in 2007 but retained that status in only 19 states in 2017 as wind and solar became more common, the US Energy Information Administration (EIA) says in an article today.

For the US as a whole, hydroelectricity was the highest renewable electricity generation source in 2017, providing 7% of the national total. By 2019, wind generation is expected to surpass hydro, based on the latest forecasts in EIA's Short-Term Energy Outlook. 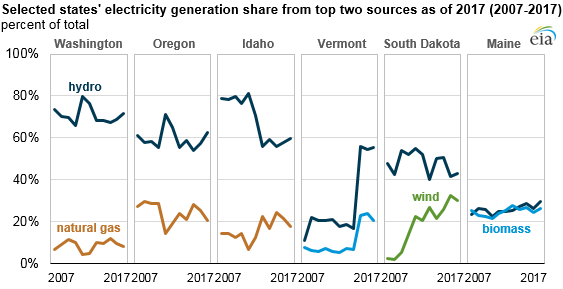 In Kansas, 36% of the state’s electricity generation in 2017 came from wind, just behind coal at 38%. So far in 2018, based on monthly data through June, Kansas has generated 42% from wind and 35% from coal. Similarly, 37% of Iowa’s electricity generation in 2017 came from wind—the largest share in the nation that year—but coal remained the most common generation source in the state, at 45%. So far in 2018, those shares have been 37% and 41%, respectively. 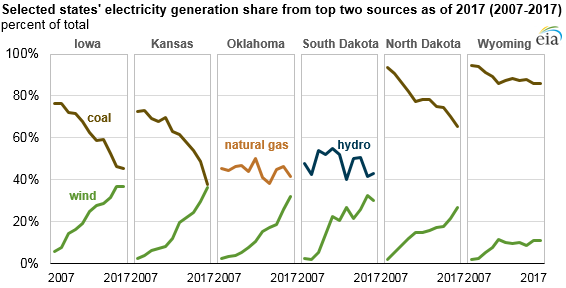 Electricity generated from biomass—which includes wood, wood waste, landfill gas, and other biogenic material—had the second-largest generation share in three states in 2017: Maine (26%), Vermont (21%), and Rhode Island (4%). In Maine and Vermont, the share of electricity generated by biomass trails only hydroelectricity, making them two of only three states where renewable fuels provided both of the top two generation shares. South Dakota, where hydroelectricity and wind were the most prevalent sources, is the third state. 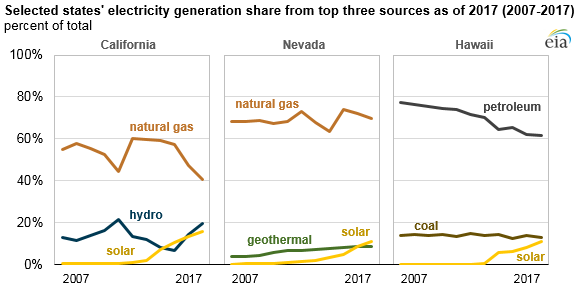 This article was published by EIA on September 11 and republished with minor changes by Renewables Now.
Principal contributor: Owen Comstock