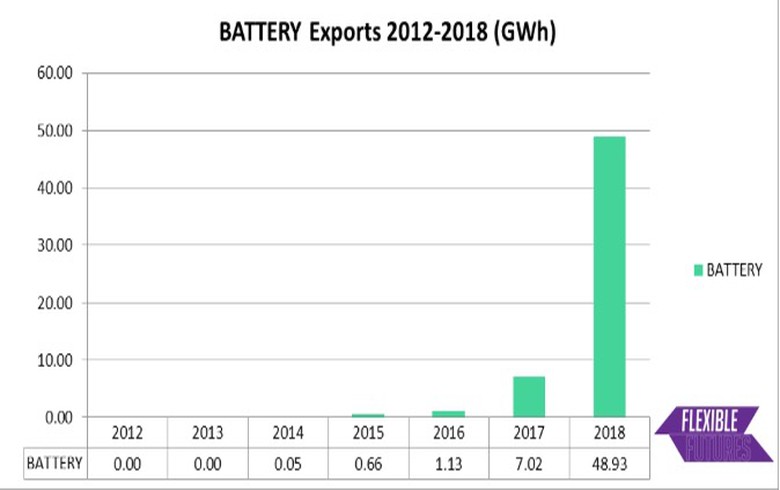 October 14 (Renewables Now) - Battery storage exports to Great Britain’s distribution networks have jumped to almost 49 GWh in 2018 from 50 MWh in 2014, in line with the growing supply of variable power generation, a new report shows.

The report by the Renewable Energy Association (REA) and energy market data hub operator ElectraLink uses data by the latter’s Energy Market Data Hub (EMDH). More data from this report will be presented at a conference on October 24.

According to the report, exports coming from weather-independent sources were more than 60% in 2012, while in 2018 this share was less than 40%, giving a clear sign that there is a growing need for networks to ensure flexibility and evolve into Distribution System Operators (DSOs).

Apart from battery storage, the released statistics also indicate a rise in solar photovoltaic (PV) exports from 194 GWh in 2012 to over 8 TWh in 2018. This total includes conventional solar photovoltaic (PV) systems and "mixed solar" where the use of battery storage or other forms of generation is suspected based on the timing of exports to the grid.

“It is encouraging to see the growing contribution of variable renewables and flexible dispatchable generation exports to the distribution network but it is also clear that more is needed to encourage the development of a truly open and transparent market to spur private investment in the flexibility technologies that will be required to ease the transition to a high-renewable energy future, and to ensure Great Britain decarbonises in line with Net Zero commitments,” said Richard Molloy, business development manager for energy storage at Eaton, which sponsored the study.