February 6 (Renewables Now) - The mix of fuels used to generate electricity in the US has changed in response to differences in the relative costs of electricity-generating technologies and their fuels. EIA’s Annual Energy Outlook 2019 shows that projected generation and capacity is significantly influenced by natural gas prices. 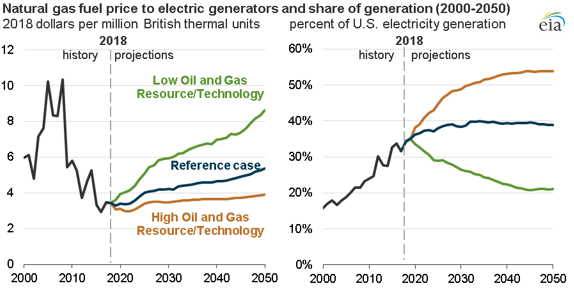 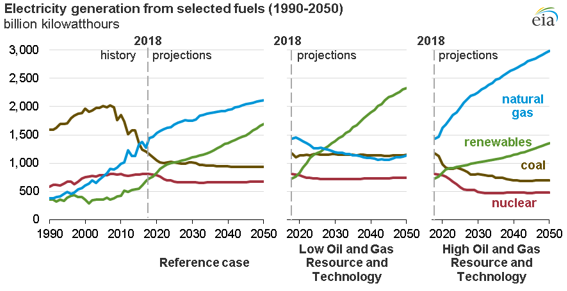 In the Low Oil and Gas Resource and Technology case, higher extraction costs and lower resource availability result in less natural gas production, and the natural gas price for power plants increases to USD 8.62 per million Btu in 2050. Conversely, in the High Oil and Gas Resource and Technology case, which has the opposite assumptions for resource extraction costs and availability, EIA projects that natural gas prices will remain well below USD 4.00 per million Btu through 2050.

Compared with the Reference case, coal-fired generation is at a higher level because of fewer retirements and higher utilization rates for existing coal-fired generating plants. Coal and natural gas maintain similar shares of total generation (slightly more than 20%) through the last 10 years of the projection period, while the renewables share grows to 43%. Solar and wind provide 22% and 13% of U.S. electricity generation by 2050, respectively. 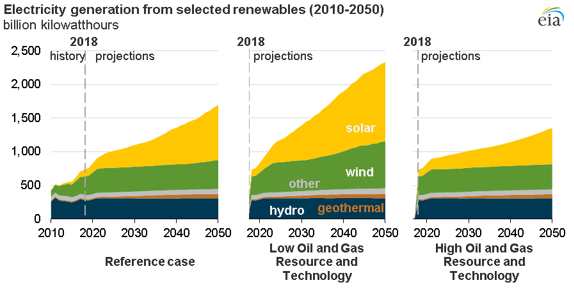