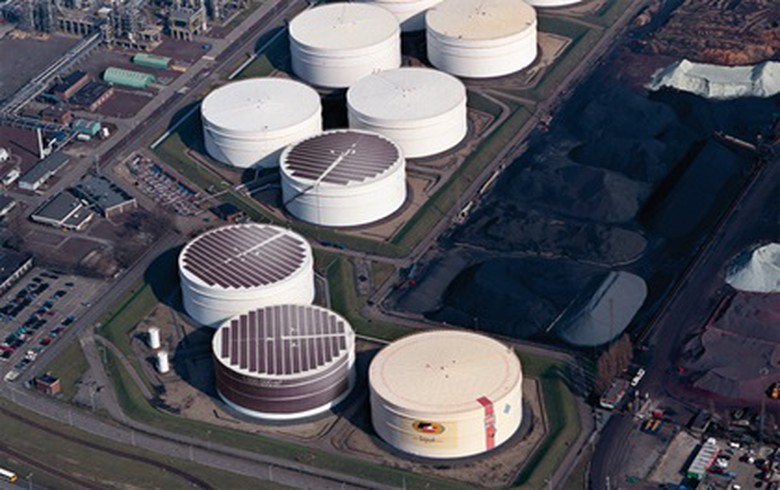 Hyet solar foil on roofs and sides of tanks of Vopak terminal in Rotterdam. Image by HyET Group (www.hyetsolar.com)

The green energy company of Fortescue Metals Group Ltd (ASX:FMG) has also provided the majority of financing for the expansion of the Dutch solar photovoltaic (PV) factory of HyET Solar.

Financial details of the deal, announced on Thursday, were not disclosed.

HyET group consists of HyET Solar, a provider of a thin-film PV solar product called Powerfoil, and HyET Hydrogen, which is focused on electrochemical hydrogen compression.

FFI chief executive Julie Shuttleworth said the company has started a design study for a 1-GW Powerfoil factory in Australia, adding that “at this scale, we aim to rapidly drive costs down at a greater rate than is achievable with conventional Solar PV technology.”

HyET Group’s founding partner SuperNova NV and Royal Vopak of Rotterdam, the Netherlands, are the remaining shareholders in the two companies.

Earlier this week, Fortescue Metals Group announced a target of net zero Scope 3 emissions by 2040, with green hydrogen supplied by FFI to play a key role in achieving it.

The target covers emissions across Fortescue’s whole value chain, including crude steel manufacturing which is responsible for 98% of the company’s Scope 3 emissions.

The iron ore company will work with customers, suppliers and other industry participants on the development of emissions reduction technologies and the supply of green hydrogen and ammonia through FFI.

It plans to decarbonise its own fleet of eight ore carriers by converting them to be fuelled by green ammonia, and to support the adoption of green ammonia in new vessel construction.