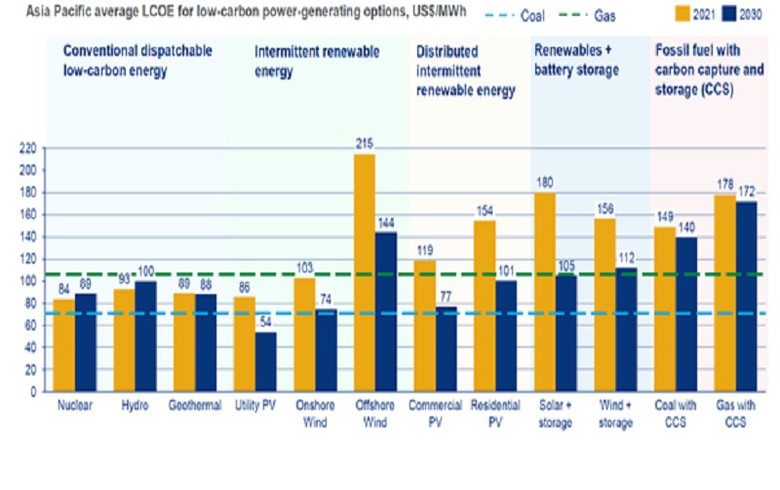 Amid a power crisis caused by high demand and supply chain tightness, costs of coal and gas power rose by 19% and 46% respectively, the analyst firm estimates.

At the same time, the average levelised cost of electricity (LCOE) for new solar projects in the region went up 9% to USD 86 (EUR 76) per MWh last year. For onshore wind projects, it climbed 2% to USD 103 per MWh.

By 2030, Wood Mackenzie expects renewable power, mostly utility solar, to be 28% cheaper than coal across the region.

“Economics is a key factor in choosing options to reduce the fossil fuel share of the Asia Pacific power system, which sits at around 70% today. Although wind and solar costs are falling, options for reliable and dispatchable power to support decarbonisation are still very expensive,” said research director Alex Whitworth.

The cost of a combination of low-cost renewables, gas peakers and batteries is now around USD 120 per MWh, which is about 60% above that of new coal power projects. It is expected to take till 2050 for the cost of this combination to fall to below USD 70 per MWh. According to Wood Mackenzie, the combination will become competitive with gas in the 2020s and coal in the 2030s.

“At the end of the day, economics is driving a higher share of wind and solar, but low cost intermittent renewables cannot replace fossil fuel power alone,” added Whitworth.