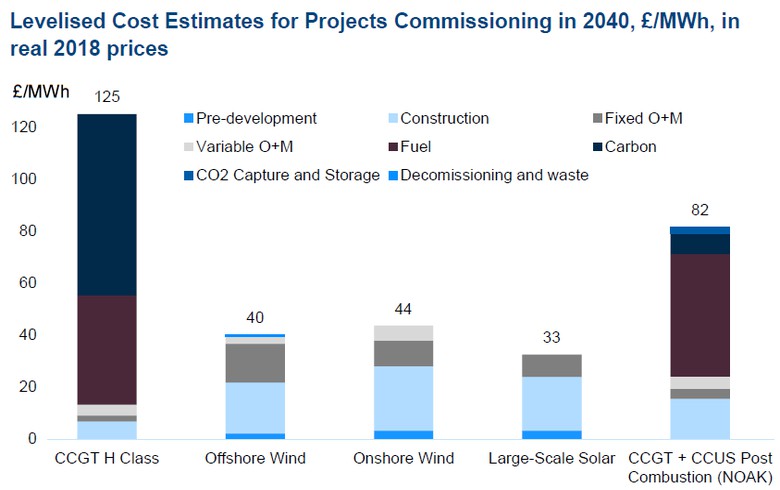 August 25 (Renewables Now) - New wind and solar power plants built in the UK in the next two decades will have significantly lower costs than gas, and they will be much cheaper than the government previously estimated.

A new report by the Department for Business, Energy and Industrial Strategy (BEIS) shows the levelised cost of large-scale solar photovoltaic (PV) generation by plants commissioning in 2040 could be as low as GBP 28 (USD 36.8/EUR 31.1) per MWh. This makes solar the cheapest electricity generation source. But the UK does not need to wait for 2040 as large-scale solar parks commissioning in 2025 will also have much lower costs than gas and wind.

The table contains BEIS’ new estimates for the costs, in real 2018 prices, of different generating technologies and a comparison with estimates it released back in 2016 for projects commissioning in 2025 and 2030. The analysis in the report has been concluded before the COVID-19 crisis struck, so the pandemic’s potential impact on electricity generation costs has not been calculated.

Chris Hewett, CEO of the Solar Trade Association (STA) welcomed the report, which he said officially recognised something the industry has known for a long time -- that large-scale PV is one of the cheapest power options available today.

“Now it is time for the Government to set an ambitious target for the deployment of solar PV in the UK, as it has done with offshore wind. Our favoured goal, 40GW by 2030, aligns with recommendations made by the Committee on Climate Change and the National Infrastructure Commission, and is achievable with moderate policy support,” Hewett said.

As is visible from the table, the cost estimates for offshore wind have also dropped dramatically between 2016 and 2020. A study led by Imperial College London (ICL) researchers recently revealed that the price for offshore wind power achieved in the third CfD auctions round is “very likely” to be below the UK wholesale price for electricity over the lifetime of the wind farms. Offshore wind projects with almost 5.5 GW of capacity, to be brought online in the mid-2020s, secured CfDs in the 2019 auctions at strike prices 30% below these reached in the CfD auction held in 2017.