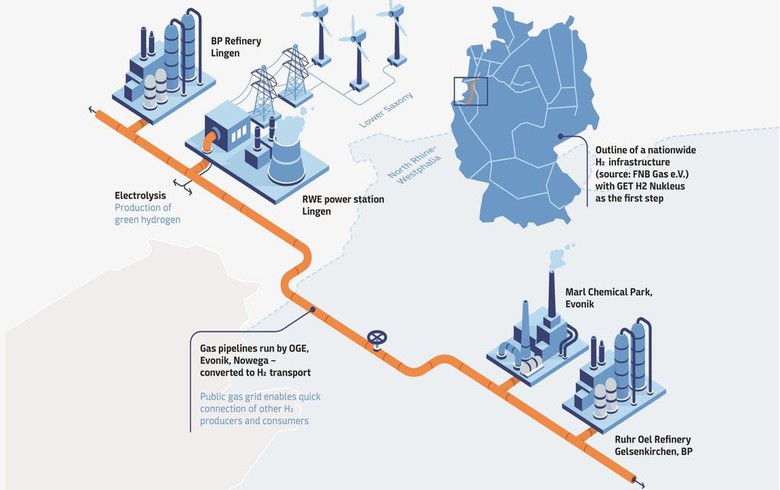 March 23 (Renewables Now) - A group of companies, among which are BP (LON:BP) and RWE (ETR:RWE), have formed a partnership seeking to jointly develop Germany’s first network that will link producers of green hydrogen with industrial customers.

Apart from BP and RWE Generation, the tie-up includes chemicals producer Evonik and transmission system operators Nowega and OGE, it was announced last week. Members in it have signed a memorandum of understanding (MOU) to develop the network from Lingen, Lower Saxony, to Gelsenkirchen in North Rhine-Westphalia state, planning first supplies through it after late 2022.

The proposed grid, called GET H2 Nukleus, will be 130-km long and will transport green hydrogen produced by a 100-MW electrolyser owned by RWE Generation. The electrolyser in Lingen will use locally produced power from renewable sources.

Hydrogen deliveries will be made to industrial customers and refineries in Lingen, Marl and Gelsenkirchen mainly through the existing gas pipelines of Nowega and OGE. Evonik will add some new pipelines that will also be part of the new infrastructure. All generators, traders and consumers will be able to get supplies.

“Production of green hydrogen and supply to customers is to start by the end of 2022 if possible, provided that this is economically viable and the political conditions are right by then,” Evonik said.