About USD 662 billion (EUR 598bn) will be invested over the next two decades to support this 122-fold jump in stationary energy storage capacity, the energy research company says in its Energy Storage Outlook 2019, published at the end of July.

“Two big changes this year are that we have raised our estimate of the investment that will go into energy storage by 2040 by more than USD 40 billion, and that we now think the majority of new capacity will be utility-scale, rather than behind-the-meter at homes and businesses,” said Yayoi Sekine, one of the co-authors of the report and an energy storage analyst for BNEF.

For now South Korea is the leader on the global energy storage market, but BNEF expects it to soon lose the top spot. By 2040, China and the US will be the leading markets. Almost 75% of the global market in gigawatt terms is expected to come from the three countries already mentioned and India, Germany, Latin America, Southeast Asia, France, Australia and the UK. 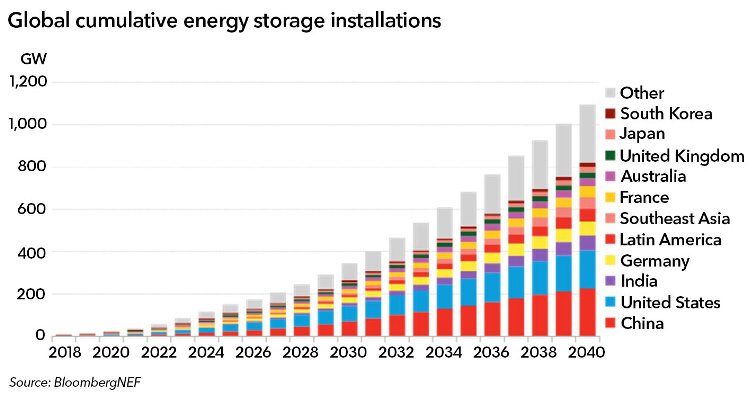 BNEF predicts a further halving of the cost per kWh for lithium-ion (Li-ion) batteries by 2030 as demand for these continues to rise in both the stationary storage and electric vehicle markets. This will come on top of an 85% reduction between 2010 and 2018. Total battery demand from the two segments is forecast to reach 4,584 GWh by 2040.