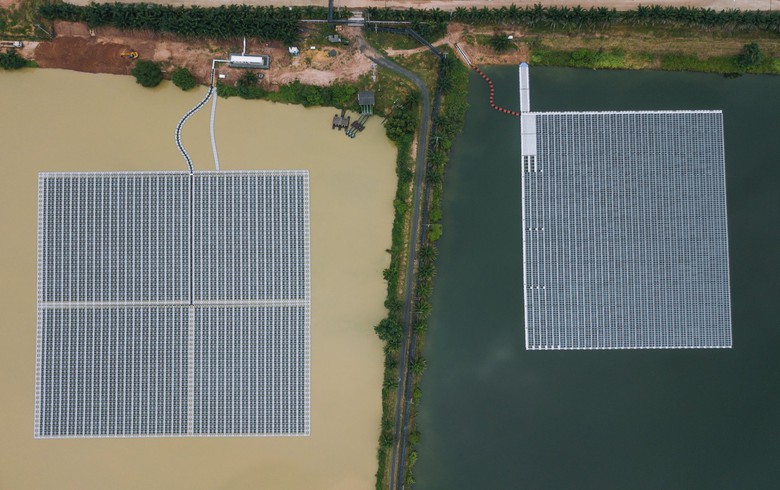 Baywa r.e. put up 6,900 bifacial PV modules on two ponds in the Thai province of Ubon Ratchathani, and fixed them on two kinds of floating platform technologies. One uses a pure pontoon technology, while the other was deployed with a pontoon and metal support structure floating technology, the German developer said.

The so-called "floatovoltaic" set ups reached commercial operation date in early 2022. The panels are expected to produce some 4,440 MWh of electricity in the first year of operation.

The floating plant operates under a corporate power purchase agreement (PPA) with Ubon Bio Ethanol PCL (BKK:UBE), a Thai manufacturer and distributor of processed cassava products, including ethanol. According to Baywa r.e, this would be the first corporate PPA for a floating solar platform in Thailand.

At present, UBE produces over 10 MWh of power from renewable sources and strives to operate 100% on green energy, UBE CEO Sureeyot Khowsurat said in a statement.

For Baywa r.e., the UBE plant is its first floating solar project outside Europe and the first one in Asia Pacific.

“This project with UBE in Ubon Ratchathani sets the stage for more floating solar opportunities not only in Thailand but beyond for BayWa r.e.,” commented Daniel Gaefke, APAC Director, BayWa r.e. “Many countries and urban cities in Asia face issues with land scarcity and as such, we are constantly looking at innovative and new ways to adapt, providing solutions that work locally driven not only at the government level, but also complemented by private sector led initiatives.”

An earlier version of this article incorrectly stated that the capacity of the UBE floating solar farm was 2.3 MW. The correct figure is 2.83 MW.