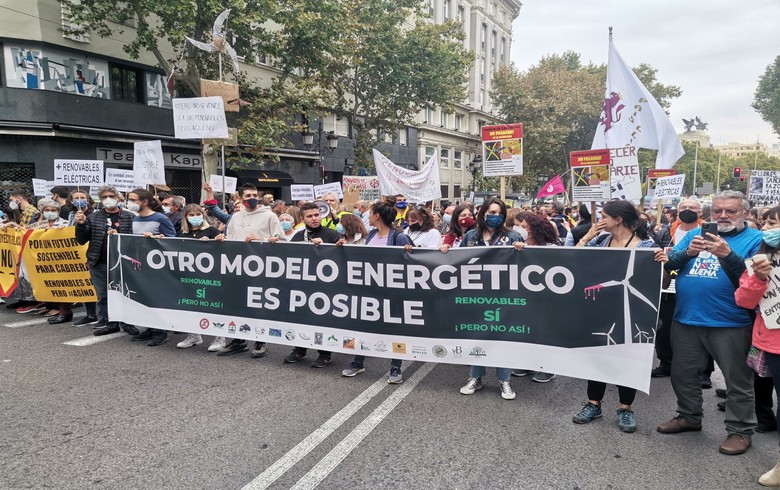 October 18 (Renewables Now) - Over 180 citizen organisations gathered in Madrid on Saturday to protest the proliferation of large-scale wind and solar farms in rural Spain.

The protests against wind and solar farm sprawl were led by non-governmental organisation (NGO) Alianza Energia y Territorio (Aliente) under the slogan “Renewables yes, but not like this” (Renovables si, pero no asi).

Aliente, an alliance grouping environmentalist groups, citizens and platforms, says that the massive deployment of “oversized” renewable energy projects and connection infrastructure requires too much land, destroys the landscape, leads to irreversible loss of biodiversity and hampers sustainable local development.

The alternative, the alliance proposes, lies in promoting a model based on distributed energy, self-consumption and energy efficiency.

The protests were supported by political group Teruel Existe, a platform representing economic interests of Teruel province in Spain’s region of Aragon and a member of the Aliente alliance. Teruel Existe claims that more than 15,000 took to Madrid streets on Saturday to denounce “colonialism” happening in rural areas with the installation of large-scale wind and solar projects that only bring benefit to big companies.

The province of Teruel and the wider region of Aragon is where Spanish renewables company Forestalia Renovables almost exclusively develops its wind and solar power projects. These projects are typically sold to moneyed investors such as Denmark’s Copenhagen Infrastructure Partners P/S (CIP) and UK’s Lightsource BP and others.

Espana Vaciada (Emptied Spain), a collective defending depopulated rural areas of Spain, sees renewables as an opportunity for the development of local communities and also stands for the distributed generation model. The group says that rural areas lose their land and natural space to large wind and solar farms, only to see that electricity exported to developed areas in “another process of colonialism”.

Small town city halls lack technical capabilities to assess the true impact of large-scale projects, and faced with depopulation and limited budgets, become swayed by the prospect of filling municipal coffers with money from renewables, according to Espana Vaciada. However, such projects do not result in favourable outcomes for the local economy and job creation, but instead hurt the tourism and agricultural sectors, the collective claims.

Espana Vaciada agrees with Aliente’s proposal that the central and regional governments should carry out orderly land planning which should consider creating exclusions zones where large-scale renewables cannot be built, the organisations say.