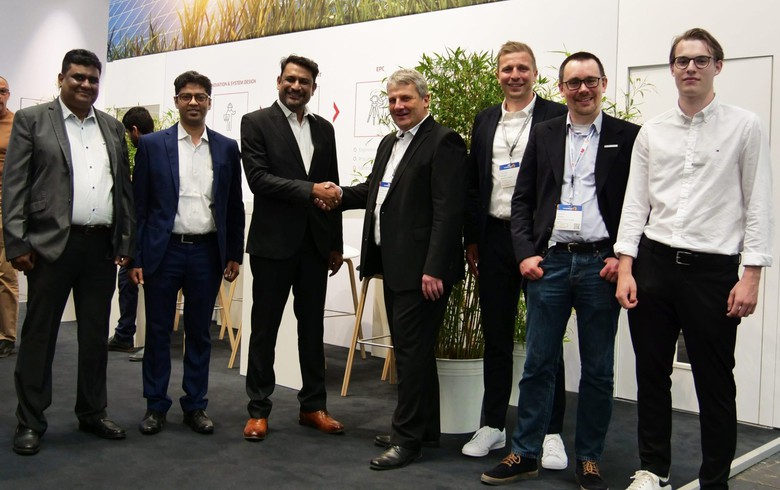 Ampyr and Belectric agree to deploy 200 MWp of solar power in Germany. Image by Belectric.

June 23 (Renewables Now) - German solar developer Belectric and Ampyr Solar Europe (ASE) have agreed to build several large-scale solar parks with a combined capacity of over 200 MWp in Germany within the next two years.

The first two projects will have a capacity of 85 MWp and 65 MWp and will be located in the state of Brandenburg, Belectric said on Wednesday.

The implementation of the 65-MWp project is seen as challenging because it will require the construction of a 25-km (15.53mi) long line and a substation.

The projects will be developed by ASE while Belectric will be responsible for the engineering, procurement and construction (EPC). The construction of the first two solar parks is scheduled to begin by the end of this year.

“Our framework agreement with Ampyr is a great basis to implement further German projects in the future," said Belectric's chief executive Thorsten Blanke.

ASE was created about a year ago through the merger of NaGa Solar with the Ampyr Energy UK solar joint venture between AGP Group and Hartree Partners. In February, the company secured a EUR-400-million (USD 420.83m) loan from CarVal Investors to deploy more than 2 GW of solar power across Europe by 2025 with a focus on Germany, the Netherlands and the UK. The 2-GW portfolio is an initial step on the way to ASE's goal to bring 5 GW of solar capacity into operation in Northwest Europe.