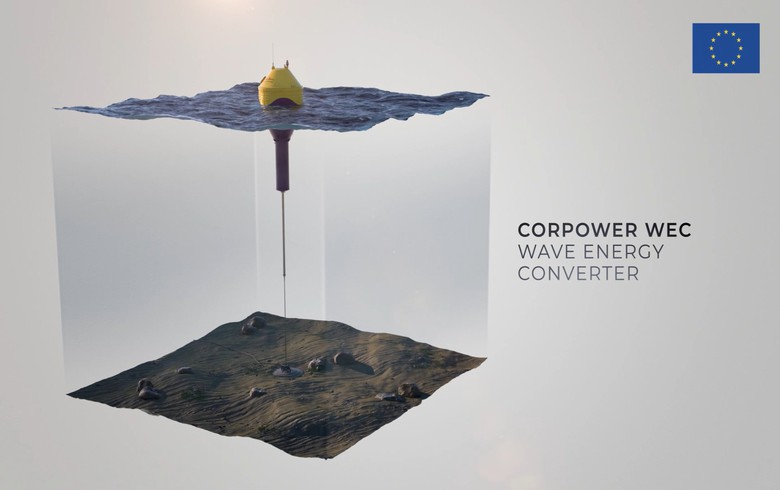 April 9 (Renewables Now) - Swedish wave energy converter (WEC) developer CorPower Ocean AB and its partners have completed the WaveBoost project, a three-year EU-funded programme that was designed to improve the reliability and performance of WECs and ensure their smooth operation in harsh ocean conditions.

CorPower Ocean, as the project lead, announced on Tuesday that the main goals of the project had been achieved. To get the most out of WECs, the group designed and developed an advanced power take-off (PTO) system, which can enable wave devices to deliver up to a 27% increase in annual electricity production, CorPower Ocean said.

The system uses a pneumatic module that is technology-neutral and can accommodate a wide range of WECs. It has 80% less components compared to previous designs, which, according to the Swedish developer, reduces its complexity and CAPEX with sacrificing the system’s reliability.

After a series of improvements on the PTO mechanism, the project showed that the levelised cost of energy (LCOE) can decrease by 18% to 29%, while operational expenditure is expected to drop by up to 30%. The LCOE analysis was undertaken on arrays of 50 MW, 300 MW and 1 GW.

Lifecycle analysis (LCA) undertaken on a theoretical 50-MW array deployed in Scotland pointed to a carbon intensity of 31.4 gCO2e/kWh, which is comparable to other renewable energy technologies available today and more than 10 times less than conventional gas turbines, CorPower Ocean said.

The company will now move on to the manufacturing, dry testing and deployment of its next full-scale C4 WEC using the project results.