US energy consumption in 2020 increased for renewables, fell for all other fuels 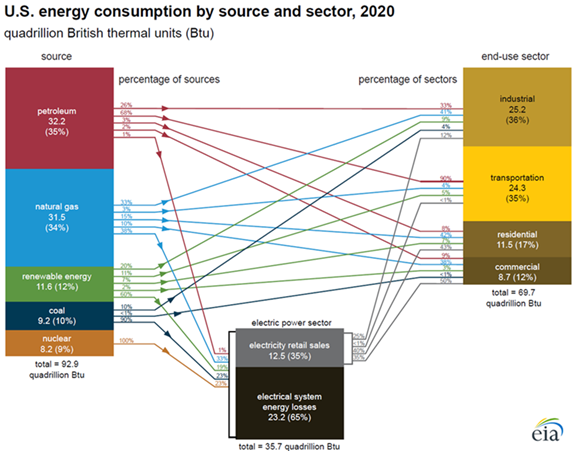 EIA converts sources of energy to common units of heat, called British thermal units (Btu), to compare different types of energy that are usually measured in units that are not directly comparable, such as gallons of biofuels compared with kilowatthours of wind energy.

EIA uses a fossil fuel equivalence to calculate primary energy consumption of noncombustible renewables (wind, hydro, solar, and geothermal), which are not burned to generate electricity and therefore do not have an inherent Btu conversion rate. In this approach, the agency converts the noncombustible renewables from kilowatthours to Btu using the annual weighted-average Btu conversion rate for all fossil fuels burned to generate electricity in the United States during that year to estimate the amount of fossil energy replaced by these renewable sources.

EIA uses the fossil fuel equivalency approach to report noncombustible renewables’ contribution to total primary energy, in part, because the resulting shares of primary energy are closer to the shares of generated electricity. This calculation also represents the energy that would have been consumed if the electricity from renewable sources had instead been generated by a mix of fossil fuels.

The electric power sector has typically accounted for one-half or more of US renewable energy consumption since the 1960s. In 2020, the sector consumed 60% of all renewable energy used in the nation, a level last reached in 1998. The industrial sector’s share of US renewable consumption has fallen from about 30% to 20% in the last 15 years. In that time, the transportation sector’s share has grown to more than 10%, mostly because of increased fuel ethanol consumption. US residential and commercial sectors consistently account for less than 10% of combined US renewable consumption.