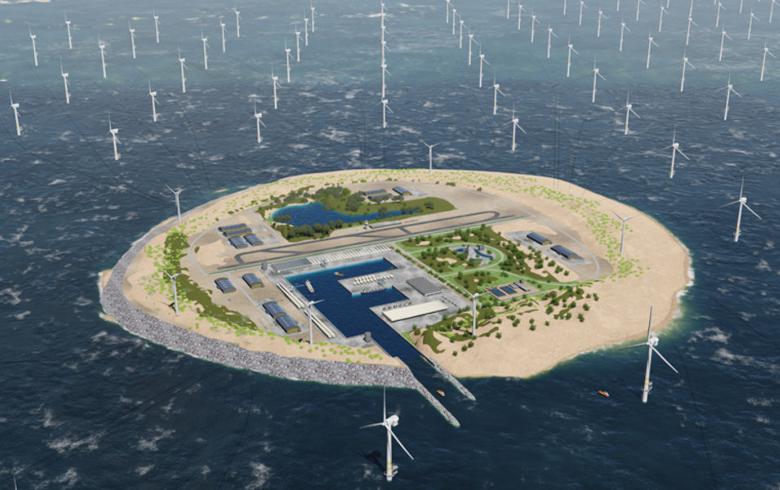 The island. Image by Tennet (www.tennet.eu).

March 24 (Renewables Now) - Transmission system operators (TSO) in the Netherlands, Denmark and Germany -- TenneT TSO BV, Energinet.dk and TenneT TSO GmbH -- will together study the feasibility of building one or more “Power Link Islands” in the North Sea.

The trio signed an agreement on Thursday and said other parties are welcome to join. They believe 70 GW to 100 GW of offshore wind power capacity could be connected to one or more Power Link Islands, which will be linked via direct current (DC) lines to the countries bordering the North Sea -- the Netherlands, Denmark, Germany, the UK, Norway and Belgium. These links will thus also serve as interconnectors between the countries.

Such a power hub in the sea will also reduce offshore wind costs.

Netherlands-headquartered TSO TenneT Holding BV presented the Power Link Island concept in mid-2016, saying one of the most suitable locations for such a project would be the Dogger Bank. Now, TenneT and Energinet will need a few years to study the details and potential of one or more Power Link Islands. One such island could be developed by 2035 if the TSOs decide to go ahead with the project.

“The ultimate goal is to build a solid coalition of companies that will make the European energy transition feasible and affordable,” said TenneT CEO Mel Kroon.