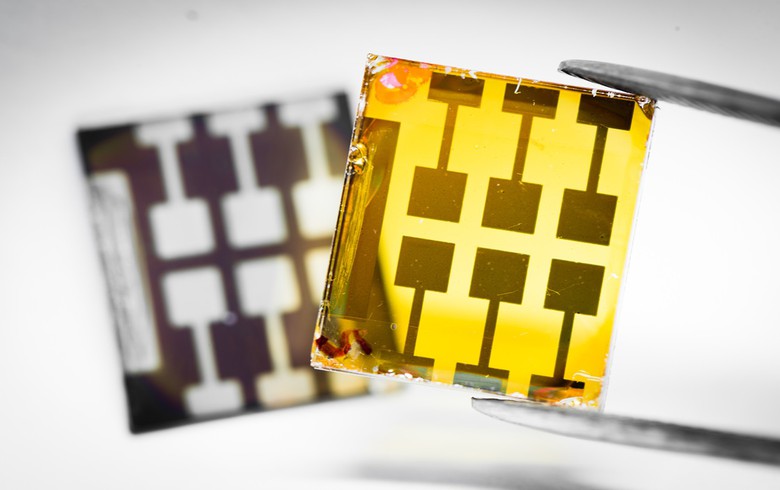 The lead-free double perovskite solar cells (yellow, in the front) compared with the lead-based device (dark, in the background). The next step is tune the color of the double perovskites into dark, so that they can absorb more light for efficient solar cells. Photo credit: Thor Balkhed, Linköping University and the Nanyang Technological University

In the laboratory at the Division of Biomolecular and Organic Electronics, LiU, postdoc researchers Weihua Ning and Feng Wang have successfully manufactured single-layer thin films of densely packed crystals of double perovskites.

"Our colleagues at Nanyang Technological University in Singapore have shown that the charge carriers demonstrate long diffusion lengths in the material, which is necessary if the material is to be appropriate for the application of in solar cells," says Feang Gao.

The power conversion efficiency of the lead-free double perovskites solar cells is still low -- only around 1% of the energy in sunlight is concerted converted to electricity but as Feng Gao says the research team has taken the first major step and developed a method to manufacture the active layer.

"We have several good ideas of how to proceed to increase the efficiency in the near future," Feng Gao notes.

REPP-backed solar project of 7.5 MW ready for construction in Burundi