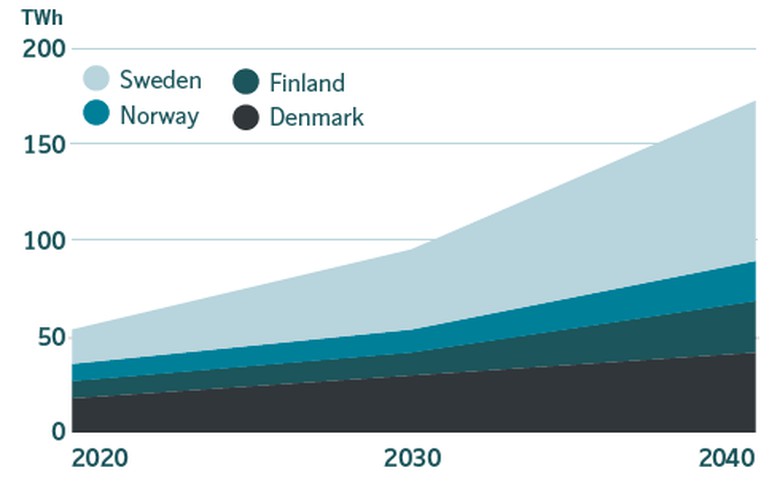 August 23 (Renewables Now) - The Nordic transmission system operators (TSOs) are preparing for a significant increase in the share of wind and other intermittent energy sources in the power mix by 2040, greater price differences between price zones and countries, and a rise in grid losses.

The Nordic Grid Development Plan 2019, released this week by Denmark's Energinet, Finland's Fingrid, Norway's Statnett and Sweden’s Svenska Kaftnaet, projects a more than fourfold increase in wind power supply in the Nordic region between now and 2040. Currently, about 40 TWh of wind power are produced in the region and the forecast is for a jump to more than 90 TWh in 2030 and then to 170 TWh in 2040.

Wind will be the main driver of the renewables expansion in the Nordic countries, coming to replace nuclear power and other types of thermal production that are to be shut down. There will also be some solar and small hydro capacity additions.

The TSOs expect “less controllable and highly weather-dependent production” to become dominant towards 2040.

The baseload power generation capacity to be phased out in the coming decades is mainly located in the southern part of the Nordic system. At the same time, most wind projects are in the north. This will result in an increase in the long-distance power flow in the system and congestion in the transmission grid. The increased north-south power flows are expected to lead to a rise in grid losses in the transmission grid to 17 TWh in 2040 from less than 10 TWh today.

Due to the higher share of wind and solar power and the lower contribution from nuclear and thermal power plants, the price volatility in the region will grow substantially from 2030 to 2040. The TSOs say that by 2040, up to 20% of all hours will have close-to-zero prices. At the same time, the number of hours with extremely high prices will go up.

The price difference between the north and the south will also be significant, with prices in the southern part being higher and more connected to the continental prices.

“An increasing volatility in production and power prices is driving up the long-term benefit of interconnector capacity within the Nordic area. The five corridors analysed for this plan all have higher benefits in the 2040 situation compared to 2030,” the TSOs say in the report.

The companies say that having stronger grids and increased trading capacity between countries would not be enough to ensure security of supply by 2040. "..there must also be available generation capacity or consumer flexibility that can provide the needed peak power. It is a regional challenge to analyse what potential there is for countries to support each other in situations of scarcity."