Solar payback times in Europe on the slide - Otovo 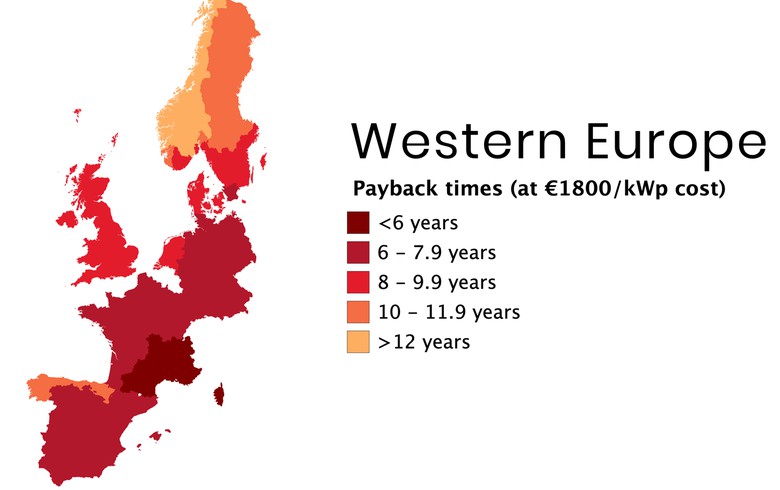 March 1 (Renewables Now) - Payback times for residential solar systems in many Western European markets have gone below 10 years, and even reach around six in sunny Spain and parts of France, says Norwegian solar platform Otovo in a recent study.

“What we observe in the solar industry the last few years is that when payback times goes below 10 years, the market increase by at least 50%. [..] We expect a very strong development in Europe the next few years,” said CEO Andreas Thorsheim.

The combination of falling photovoltaic (PV) panel prices and higher CO2 costs for polluting fuels is making solar power more attractive for consumers in Europe. To compare payback times across key European markets, Otovo assumed a fixed set of factors, equal for all countries, including a system size of 2.9 kWp where 80% of the solar power is self-consumed. The system cost is set at EUR 1,800 (USD 2,050) per kWp and the analysis is based on current subsidy conditions.

Otovo points out that in markets in which solar owners do not rely on feed-in tariffs (FiTs), such as Spain and Denmark, the high self-consumption share is very important for achieving short payback times. The calculated payback times below could jump by as much as 60% in a scenario with 50% self-consumption, compared to the 80% in this analysis.

The study shows that France is the only market for now where the payback times go below six years. This is valid for the south and southeast, while consumers throughout the country can expect payback times of 6 to 7.9 years at current conditions. Payback times have dropped because of the high CO2 price leading to higher electricity prices and the introduction of a subsidy scheme and value added tax (VAT) reduction on systems of up to 3 kWp in size.

Payback times have fallen to 6 - 6.9 years also in central and southern Spain, but they can be as high as 10 - 10.9 years in the north. Otove explains that the country offers some of the best meteorological conditions for solar power generation in Europe, but the “solar tax” on self-consumption hindered market growth in the past. It ended in September 2018 so “Spain now looks set for a comeback as one of the most attractive markets in Europe,” Otovo said.

Even without subsidies, the abundant sunshine and high electricity prices result in attractive payback times for solar projects in Spain. In Malaga and Seville, for example, the investment can be earned back in six to seven years.

In Germany, the payback time has been calculated at between 7 and 7.9 years as a result of high consumer electricity cost and very good conditions for solar prosumers. Bavaria and Baden Württemberg in the south are especially good regions for solar generation.

Payback times in the Netherlands are at 8 to 8.9 years, with a working net metering programme and VAT reductions. The same is valid for the southern parts of England, while new solar system owners in the rest of the UK can expect to recoup their investment in 9 to 9.9 years. However, solar arrays installed after March 31, 2019 will not have access to the generation and export tariffs so payback times are expected to increase to 10-12 years.

Payback times in Denmark are also 9 to 9.9 years currently, mainly because it has some of the highest consumer electricity prices on the continent. In Sweden the time varies from 7 years in the south to 10.9 years in most of the country, but the local solar market as a whole is expanding rapidly. Otovo said annual installations have been rising by 50% over the last four years.

Otovo describes Norway as “the biggest surprise in this analysis” as payback times have fallen from 12+ years a year ago to 9 - 9.9 years in the southern parts of the country. “2018 has seen electricity prices come up due to a dry first half of the year, increased energy trade with its neighbouring countries and higher CO2 prices in Europe,” the solar company explains, adding that there is also the subsidy offered to cover part of the system cost.