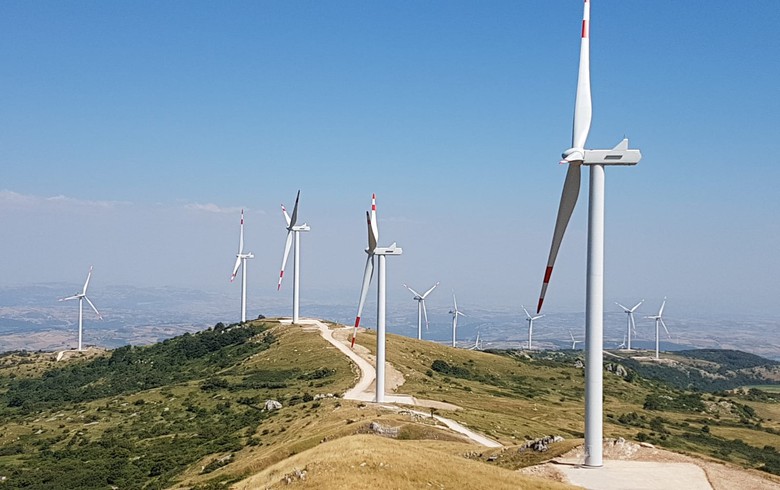 The Morcone wind park in Italy. Image by: RWE AG.

March 13 (Renewables Now) - German energy major RWE AG (ETR:RWE), which is beginning to place a greater focus on renewables, reported adjusted earnings for 2019 that exceeded its goals and expectations.

In 2019, adjusted net profit more than doubled to EUR 1.2 billion (USD 1.34bn) from EUR 591 million a year earlier, with adjusted earnings before interest, tax, depreciation and amortisation (EBITDA) surging to EUR 2.1 billion from EUR 1.52 billion. RWE pointed out that “this is much more” than the group had predicted originally, with the main reasons being its solid trading performance and the reinstatement of the British capacity market.

Following last year’s asset and share swap deal with E.on SE (ETR:EOAN), the Essen-based group ended up with a portfolio of wind and solar parks totalling 9 GW along with a sizeable project pipeline that exceeds 20 GW. It will seek to grow its wind and solar portfolio by more than 4 GW over the next three years, having 2.7 GW already under construction. This will require net investments of EUR 5 billion by 2022 and, RWE said, the sum could rise substantially through contributions from partners. The expansion will involve the company’s core markets of Europe and North America, as well as the Asia-Pacific region.

Meanwhile, RWE said it “will bear the main burden” of the country’s proposed lignite phaseout and will execute the capacity reduction required by 2023 almost entirely on its own. By 2030, the group expects to cut its workforce by around 6,000 within the scope of a “socially acceptable” redundancy scheme.

The group noted that it reports former subsidiary Innogy as a purely financial investment for the last time and added that from now on it will report its business performance based on a new structure including four main segments, namely Offshore Wind, Onshore Wind/Solar, Hydro/Biomass/Gas, and Supply & Trading, while Coal/Nuclear will supplement them as a fifth segment.

The table below shows the adjusted EBITDA performance of RWE’s five newly structured segments and the group’s forecast for these businesses. The projections refer to pro forma results for 2019 and indicate the development of business including the operations acquired from E.on SE for the full year.

The executive and supervisory boards of RWE will propose an increase of the annual dividend to EUR 0.80 per share. For 2020, the plan is to raise the payable distribution to EUR 0.85 per share.