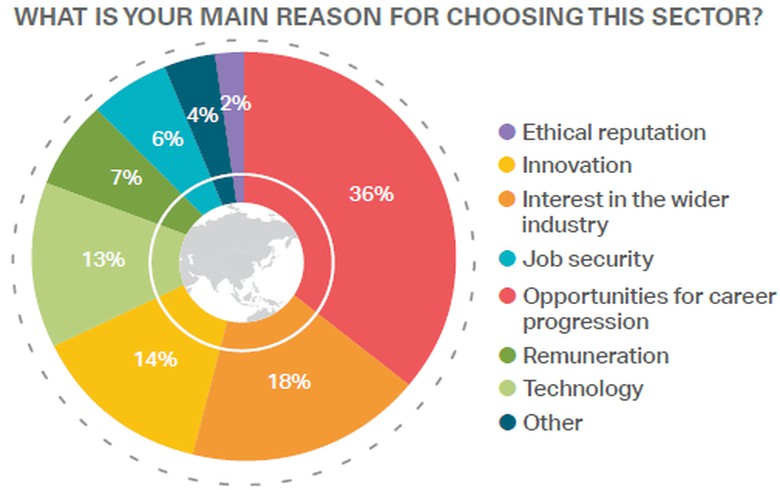 Chart from GETI report at www.getireport.com.

January 22 (Renewables Now) - The renewable energy sector is facing a new challenge -- retaining talent -- possibly due to unease about its long-term prospects, according to the third annual Global Energy Talent Index (GETI).

The authors of the report, workforce solutions provider Airswift and energy and engineering jobsite Energy Jobline, said one of the big surprises in this year’s survey was the greater willingness of renewables professionals to move. About 77% of professionals said they were open to changing sectors, up from only 43% a year ago. Power and oil and gas are the most popular destinations.

"Despite pay going up, and there being apparent happiness with the sector, a lot of people are ready to move. Perhaps this reflects unease about the sector’s long-term prospects, either due to skills shortages, political considerations or a combination of factors. In any case, it’s something for companies to keep an eye on," said Hannah Peet, managing director a Energy Jobline.

"Renewables isn’t typically the best paid sector – people tend to be there for other reasons. However, if the pay disparity gets too big, loyalty might be tested. And as the sector grows there’s also more competition within renewables to drive up pay rates too," Peet added.

Renewables professionals have their worries too. Total of 24% ranked the political landscape as the most worrying issue for the sector. This is followed by innovation, skills shortages and climate change, all at 18%.

A significant 46% of sector professionals are worried about an impending talent emergency in the sector. Thirty percent believe the crisis has already hit and a further 29% expect it within the next five years. Talent shortages are especially pronounced when it comes to engineering, but also project leadership.

The report can be downloaded at www.getireport.com/download-report/.