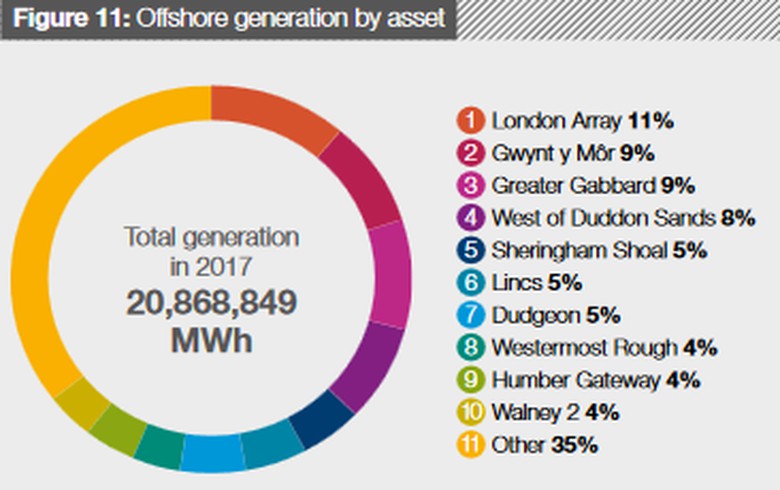 April 17 (Renewables Now) - Offshore wind accounted for 6.2% of the UK’s total electricity generation in 2017 and is on track to reach a contribution of 10% by 2020, shows data released by Тhe Crown Estate.

At the end of last year, the country had 33 fully operational offshore wind parks with a combined capacity of 5.83 GW and an additional eight plants under construction, which will add some 4.58 GW of new capacity.

The UK’s share in Europe's cumulative installed offshore wind power capacity is 43%. According to the Crown Estate’s operational report, the output in 2017 was enough to meet the demand of around 5.3 million UK homes and helped save 8.6 million tonnes of carbon dioxide (CO2) emissions.

Seven offshore wind farms, totalling 1.8 GW, were put into service in 2017 alone, which the Crown Estate described as “the UK’s busiest year yet in offshore wind.” Four of these seven plants were fully commissioned.

The Crown Estate noted that the British offshore wind sector has achieved greater efficiency of commissioning and project management during the power-up phase and handover to operations, which has led to a fivefold increase in the average build rate between 2015 and 2017. The broadening investor pool and increasing number of financial investors is also a positive sign for the segment.

Overall, renewable energy facilities produced 29.4% of UK’s total power last year, of which 6.2% came from offshore and 8.5% from onshore wind farms. Bioenergy accounted for 9.5% of the total, while solar contributed 1.8% of the country’s power production.

The full report is available at http://www.thecrownestate.co.uk/media/1142289/offshore-wind-operational-report_digital.pdf.