Under the current roadmap, the Netherlands is constructing five offshore wind farms with a combined capacity 3.5 GW by 2023, to be added to 1 GW of existing wind farms. The new plan calls for a further 7 GW of offshore wind capacity to be built in the 2024-2030 period. The government will start tenders for the new wind farms from 2021.

Three wind farm zones -- Holland Coast (West), North of the Wadden Sea Islands, and IJmuiden Far Offshore -- have been identified for the additional capacity. These are shown in green in the map below. In blue are the existing areas from the 2023 roadmap and in red are the existing wind farms. 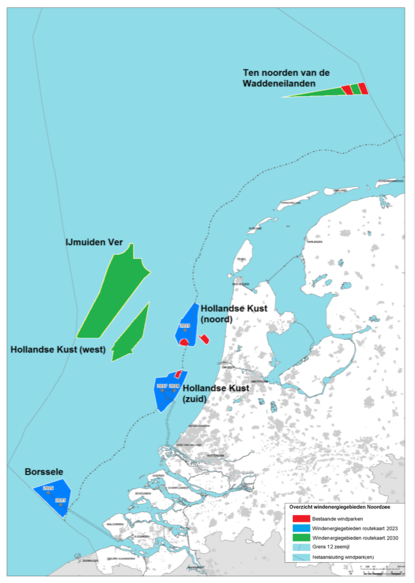 In a statement, Dutch grid operator TenneT Holding BV said direct current (DC) connections will be needed to connect offshore wind on a large scale and across longer distances, as is the case with IJmuiden Far Offshore. TenneT added it is working with relevant authorities to research the option of constructing an island in the IJmuiden Far Offshore zone, as an alternative to multiple DC platforms. An island would offer opportunities for converting wind power into hydrogen, while a wind connector to the UK will allow the infrastructure to be used for both connecting wind farms and integrating electricity markets.

Below is a table summarising the 2030 roadmap as provided by the Dutch Ministry of Economic Affairs and Climate Policy.

The ministry said the roadmap provides clarity to developers, which has already contributed to cost reductions. It is expected to result in EUR 15 billion-20 billion (USD 19bn-25bn) investment and 10,000 jobs during the 2024-2030 period.

The total offshore wind capacity to be reached by 2030 will produce electricity meeting 40% of the Netherland's total electricity consumption. The government says the construction of more offshore wind farms after 2030 will depend on a switch to electricity in industry, building heating and mobility, as well as generating hydrogen using wind power.