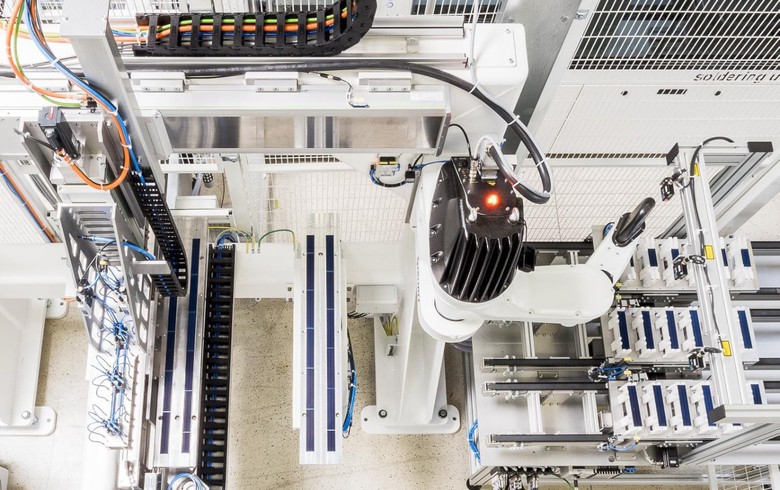 The first module prototypes are being presented at Intersolar Europe Restart 2021 this week in Munchen.

M10 Industries AG developed the matrix stringer for the production of the modules on an industrial scale. It can process 12,000 shingle cells per hour in a fully automated process, connecting the cells completely lead-free. The first prototype started work in Freiburg after seven months of development and is available there for further testing.

In shingle modules, the PV cells are overlapped in a shingle arrangement using electrically conductive adhesives to form cell strings. These solar modules have a greater efficiency, since the currents are smaller than in half-cell modules and since there are no spaces between the cells of a string.

In the matrix shingle concept developed by Fraunhofer ISE, the shingled cells are additionally arranged in an offset manner achieving complete, homogeneous occupancy of the full module area. The institute says this adds 2 to 6 percent to the efficiency of matrix shingle modules when compared to modules with conventionally connected half-cell PV cells.

The matrix shingle technology has also achieved a very high tolerance to partial shading. The current can flow around the shaded areas, producing up to 100% more electricity under partial shading compared to conventional modules, Fraunhofer ISE added.

The stringer has been built as part of the Shirkan project, funded by the German Federal Ministry for Economic Affairs and Energy (BMWi).