Genesys gets US patent for hybrid solar/hydrogen technology 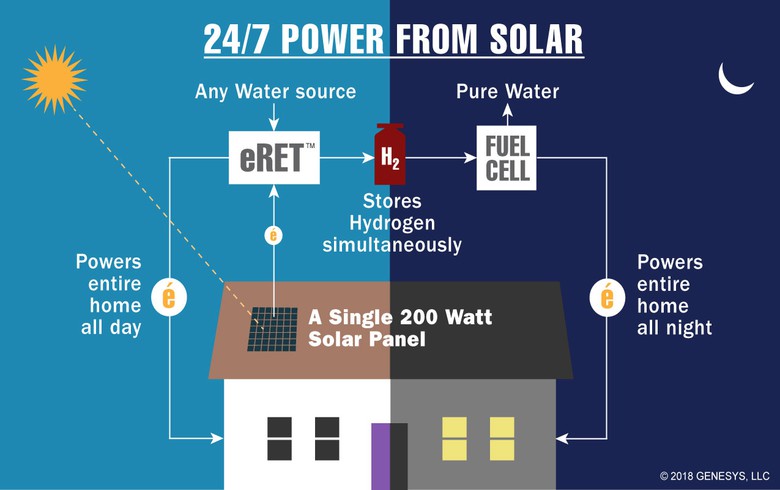 June 7 (Renewables Now) - Genesys LLC has obtained a US patent for a solar power amplifier that is capable of producing electricity in the multiple kilowatt range and providing a 24/7 service using a single solar panel of 200 W.

The eRET (Electrical Radiant Energy Transfer) technology developed by Genesys and validated by a certified third party can increase the power of a solar module by up to 100 times, the company claims. The system generates electric currents using a cascade process rather than the commonly used induction process and converts the flow of the low energy electrons supplied from the solar panel into high energy electrons. In addition, energy is stored in the form of hydrogen fuel cell for later use of the generated power. The company says it has demonstrated a working prototype generating power as high as 40 kW from a solar installation with a capacity of 200 W.

The US Patent and Trademark Office (USPTO) has allowed the patent for Genesys’ technology after failing to find any similarities to this invention in an extensive patent and scientific literature search. Genesys said it has also filed patent applications around the world.

“This technology will allow the consumer to generate 24/7 electrical power without the need of any electrical grid infrastructure or battery storage as well as create a technology platform for the generation of chemicals from simple precursors such as water and carbon dioxide,” commented CEO Ronny Bar-Gadda.

Genesys said in a statement that it is open to multiple types of business arrangements involving its technology. It noted that the eRET can also be used to replace lithium-ion batteries in self-charging cars, to power drones, or to enable off-grid electrical power technology. One future application is waste treatment using oxygen as a source to produce ozone.