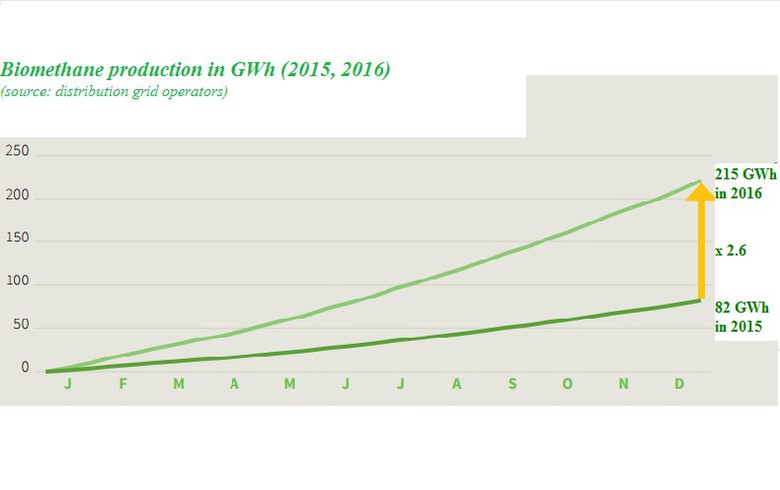 February 27 (Renewables Now ) - The biogas sector in France grew at a remarkable rate in 2016, increasing production by 162% year-on-year.

A total of 215 GWh were produced last year and fed into the gas distribution network in France, compared to just 82 GWh in 2015.

According to a detailed report by GRDF, GRTgaz, SER, SPEFNN and TIGF, France currently has 26 biogas plants that feed their production to the distribution network but 241 projects are at an advanced stage of development.

Nevertheless, the sector has plenty of room to grow, as this year's production accounts for just 0.05% of the overall gas consumption in France while the energy transition law targets the share of gas from renewable energy sources to reach 10% of the consumption by 2030.

Just a few days ago, French start-up Waga Energy announced it created 98% pure biomethane from domestic waste and has injected it in the natural gas distribution network of GRDF.

The technology, called Wagabox, was first deployed in Saint Florentin in the Yonne department. The installation, created in partnership with Coved, will deliver 20 GWh per year, which represents the annual consumption of 3,000 homes or some 100 buses.

A second Wagabox will be installed on a Suez Group waste storage facility in Saint-Maximin. The long-term goal is to reach 100 Wagabox installations by 2025.