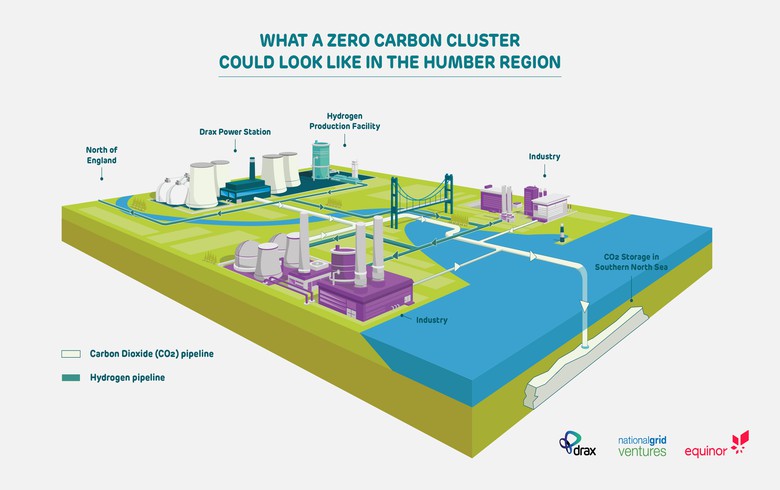 May 28 (Renewables Now) - UK power generator Drax Group Plc (LON:DRX) has teamed up with Norway’s Equinor (NYSE:EQNR) and National Grid Ventures in a project that will combine hydrogen production with carbon capture usage and storage (CCUS).

The partners have selected England’s Humber region to create a cutting-edge low carbon hub. It could turn into the first net zero-carbon area in the world, Drax said on Monday.

Drax already operates a bioenergy carbon capture and storage (BECCS) pilot plant in North Yorkshire where it captures carbon dioxide (CO2) emissions from biomass power generation. Under the joint project, the three companies will seek to expand the BECCS pilot project to create a carbon negative power station in the 2020s. They will also explore the potential for developing a large-scale hydrogen demonstrator at Drax by the mid-2020s, at the earliest. The joint effort comes in line with the Committee on Climate Change’s (CCC’s) recommendation for the production of hydrogen at scale in at least one industrial cluster by 2030 and a net-zero carbon economy by 2050.

The partners intend to publish a study covering the technical, economic and societal opportunities for CCUS and hydrogen in the Humber later in 2019.

“Globally we must see substantial decarbonisation of industry and energy in the years ahead, and we believe CCS and hydrogen must play a significant role in this,” said Irene Rummelhoff, Equinor’s executive vice president for marketing, midstream and processing.