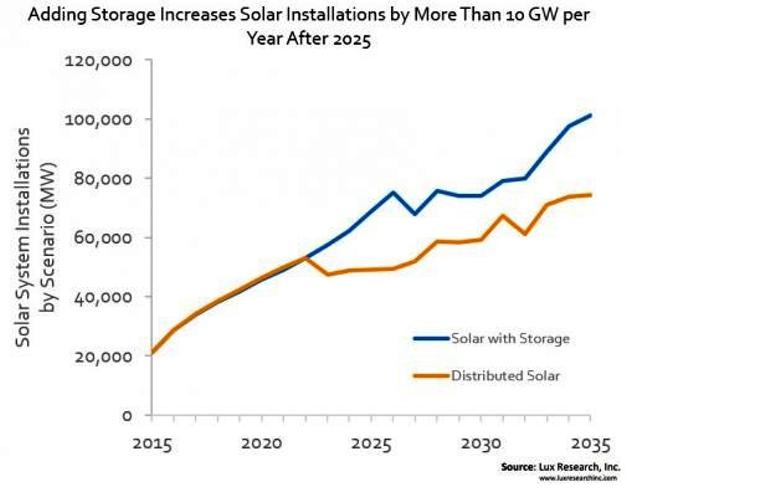 January 29 (SeeNews) - Distributed storage for solar systems will be an USD-8-billion (EUR 7.3bn) market in 2026 as solar pairs with storage to overcome limitations such as intermittency and to continue its strong growth, Lux Research said on Thursday.

Adding storage means additional costs but as solar systems become cheaper an attractive economic case will emerge in 2023, leading to robust growth, the research firm says. It forecasts that installed solar system costs will fall to USD 1.87 per W in 2035 from USD 3.83 per W in 2015.

According to its report, energy storage will boost the distributed solar market by 25 GW annually in 2026.

Lux Research senior analyst Cosmin Laslau says that as the solar-plus-storage market matures, there will be more vertical integration between the two industries, more financing options and even a move towards energy-sharing between communities.

Solar-storage partnerships have already started to emerge, including tie-ups between Stem and SunPower, Green Charge Networks and SunEdison, and Sonnen and Sungevity. First Solar, meanwhile, has invested in Younicos.

Lux Research has found that software is a key differentiator with some market players offering demand management software and others a capability to analyse weather data, for instance.

The firm also says that policy support has big impact. Germany has installed 12,000 solar-plus-batteries systems since 2013 thanks to policy support. Japan has launched a subsidy scheme for lithium-ion battery systems of at least 1 kWh. California also offers incentives and requires utilities to install 1.3 GW of storage by 2020.