With the falling prices of wind, solar and energy storage technologies, boosting the share of renewables in the electricity mix has become a relatively easy task in many parts of the world. Greening transport, however, has proven a more challenging task, as Germany's Energiewende shows.

Germany has reached a 35% share of renewable energy in power, but just around 5% in transport. The switch away from petrol and diesel cars is a delicate topic in the country, which is famous for its automobile industry, but it may present the easiest solution to the task of cutting transport emissions.

Whether or not the new German government takes measures in that direction, the move away from fossil fuel cars in the country is imminent and would happen faster than forecast, say experts and analysts following the progress of the energy transition.

According to figures by the German Renewable Energy Federation (BEE), the share of renewables in Germany's final energy consumption climbed to 15.2% in the first half (H1) of 2017 from 14.8% a year earlier.

The contribution of renewable energy sources rose to 35.1% in electricity generation, but in transportation, it went down to 5.1% from 5.5%, and, in heating, it just inched up to 13.6% from 13.3%. BEE earlier this year warned that with current policy the country would not be able to meet its 18% renewable energy goal for 2020. 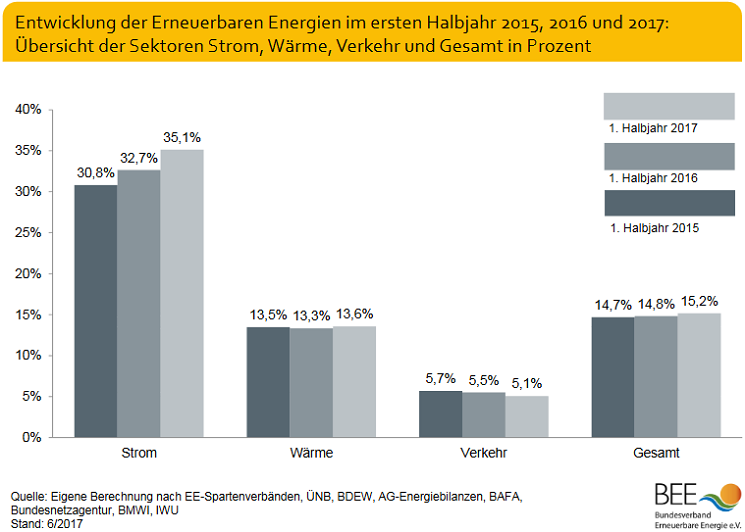 By the end of the decade, Germany aims to cut greenhouse gas emissions (GHG) by 40% from 1990 levels. Figures for 2016 show that GHG emissions have fallen to 906 million tonnes of CO2 equivalent, as compared to 1,251 million tonnes in 1990. This represents a reduction of about 28%.

The energy sector is and will remain the main source of GHG emissions. Between 1990 and 2016 it has achieved a reduction of 27% thanks to the increase in renewable energy use and the closing of coal-fired power plants, as well as the increased use of cogeneration, Berlin-based think tank Agora Energiewende says.

In transport emissions in 2016 were higher than in 1990. Agora explains that this is in part due to the rise in freight and passenger traffic.

The table below shows where most emissions in Germany come from.

Agora this month updated its calculations for emissions reduction and said that the gap between the 2020 goal and the current achievement is wider than previously estimated.

By 2020, total emissions will have to fall below 751 million tonnes of CO2 equivalent to achieve the 40% reduction target. According to Agora’s report, however, a reduction of 30% to 31% is what can be realistically achieved. The federal government expects a GHG cut of 35% with the already adopted climate protection measures. 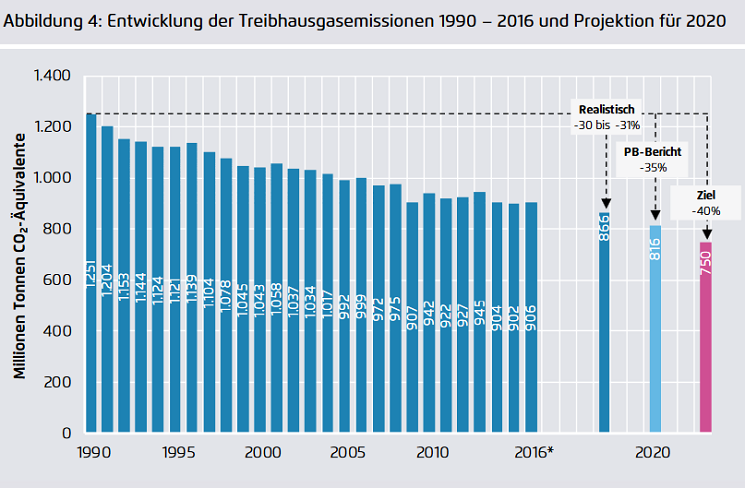 This month, China announced plans to set a deadline for automakers to end sales of vehicles that use fossil fuels. France, the UK and several other markets have also taken or are evaluating similar measures.

In Germany, the Volkswagen (VW) diesel emissions scandal opened the “dieselgate” and gave rise to a huge debate, but “drastic” measures like banning fossil fuel cars in the future have not been taken yet. Even if that never happens, pure market forces could make it hard for German car manufacturers to remain competitive in a market where EVs are getting more popular and more affordable, unless they embrace the idea of the electric car.

Around 79% of cars produced in Germany in 2015 were ultimately destined for foreign shores, according to a report by economic development agency Germany Trade & Invest (GTAI). In that same year, German passenger car and light commercial vehicle makers booked foreign market revenue of over EUR 263 billion (USD 314.4bn).

VW and BMW in Germany and a number of other global sector players have already committed to have all or at least part of their models available in electric versions in the next decade or so. Aleksandra Rybczynska of Bloomberg New Energy Finance (BNEF) forecasts that there will be 112 battery electric and 72 plug-in hybrid models available around the globe in 2018.

Over the past decade, the push to install wind turbines and solar panels resulted in an impressive drop in prices. Deployment statistics for these technologies have beat many forecasts from the past. Imagine the same thing happening with EVs with China, the UK, France and other countries planning to ditch fossil fuel cars.

The EV revolution raises the very important question of where one actually gets the power to charge the vehicle, and that presents a great opportunity for renewables and storage.

In June, Tesla Inc (NASDAQ:TSLA) CEO Elon Musk said on Twitter that all Superchargers, the fast EV charging stations by the company, would use solar/battery power.

All Superchargers are being converted to solar/battery power. Over time, almost all will disconnect from the electricity grid.

Currently, there are 951 Supercharger stations in North America, Europe, the Middle East, and Asia, according to Tesla’s website. No details are available on the progress of turning them solar, but if Musk sticks to that tweet promise, Tesla will be installing a lot of solar panels and energy storage units...

Several days ago, the UK re-launched an inquiry into EV with an additional focus on the pressure that the expansion of that market would create for the power grid and existing energy infrastructure. The Renewable Energy Association (REA) quickly responded with a call for a national charge infrastructure strategy and said that the strategy for EV roll-out should include “smart charging and the incorporation of renewable power and energy storage systems to reduce grid stress.”

The good news is that in many markets renewables like onshore wind and solar photovoltaics (PV) are the cheapest options for new power capacity, so meeting the extra demand created by a surge in EV use could be done with green electricity and at competitive rates. Germany’s 200-MW solar tender completed in June saw an average winning bid of EUR 56.6 per MWh, and its second onshore wind auction awarded contracts to 1,013 MW of projects with the average successful bid arriving at EUR 42.8 per MWh.

Even offshore wind is getting cheaper, slowly but surely, with Germany’s first tender for the technology, targeting 1,550 MW of capacity, getting bids for zero subsidy for projects going live in the next decade, and offshore wind strike prices in the UK’s second Contracts for Difference (CfD) auction fell to GBP 57.5 (USD 78/EUR 65) per MWh for projects commissioning in 2022/23.

According to JPMorgan estimates, electric vehicles would reach a global market share of 35% by 2025 and 48% of 2030. That giant leap will require a rapid increase in power generation and further rethinking of electricity markets. In a world combating climate change such challenges are inevitable. Burning coal and oil to make power when cleaner, and now cheaper, alternatives are available sounds illogical. What about driving a car emitting foul gases if one has access to zero-emission technology at a good price in the future?